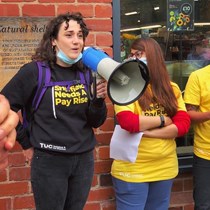 Sheffield Needs A Pay Rise is a movement of low wage workers in the “low pay capital” of the country, coming together to demand fair pay, stable hours and union rights.

By engaging young, precarious workers in the labour movement and supporting them to lead collective action, we are building a future for the next generation of exploited workers to improve their own and their families’ lives.

With the help of individuals and organisations across the city and beyond we have funded a full time Organiser on the campaign this year. As a result the movement has trained dozens of activists, recruited hundreds of workers and achieved multiple significant wins against global corporations, from winning thousands of pounds of stolen wages for workers, to extra staffing and sick pay.

“There’s too many workers not paid a fair wage who are seen as lesser by companies who treat us badly. I am proud to be part of a campaign that shows my co-workers that we are worth more. As we band together, and get more people involved we can fight back and get what we deserve, because right now we don't get enough respect. Campaigns like Sheffield Needs a Pay Rise could be life-changing for workers just like me all across the country.”

We are now fundraising to continue this important project beyond 2021. All funds go towards the salary of a full time Organiser in Sheffield.

Find out more about the campaign, including details of our wins and press coverage, on Facebook and Twitter.

Sheffield Needs A Pay Rise is a movement of low wage workers in the “low pay capital” of the country, coming together to demand fair pay, stable hours and union rights.