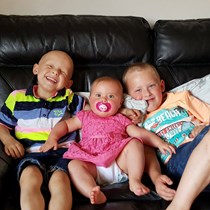 We are trying to raise money for our son Toby to fund treatment & help him make memories & try and have fun times during his Neuroblastoma Journey ... At Christmas Toby became unwell, we took him to the doctors where we were told that he had a virus and he would be ok in a couple of days, however Toby became more ill and was so weak he was unable to walk. We took him to A&E and on the 6th of January on Toby's 4th birthday we were given the devastating news that Toby had stage 4 Neuroblastoma we were absolutely devastated we didn't know what to do. Toby had gone from a very active little boy to being unable to move without help. We were told that Toby would need intense Chemotherapy & Radiotherapy as well as an operation to remove the main tumour on his kidney, we were told that the treatment would last at least a year and it will make him very ill. Toby has a big brother Ollie who is 6 years old and a baby sister Sienna who was 4 months at the time (now 11 months) we are very busy trying to balance home life as well as a life in hospital. We need to raise money for Antibodies & other treatment that maybe needed, Toby was on a trial where he would receive antibodies on the NHS however because treatment hasnt worked as expected & Toby requires extra treatment he can no longer continue on the trial so we now have to pay for antibodies which will cost £200,000 we are absolutely devastated. We may so need to travel abroad for treatment if the treatment in the UK still doesnt work

This page is to help raise money for Antibodies. Toby was entitled to antibodies on the trial he was signed up to however because treatment isn't working as expected he can no longer continue on the trial & we now have to pay for antibodies which will cost £200,000