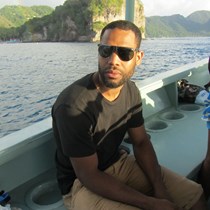 Anton is a 32 years old, he was born in St Lucia and came to the UK at the age of 18. Anton married at the age of 26 and worked endlessly as a plumber. He has 3 young children who he adores. Anton was the main breadwinner of the family however he is now unable to work and is fighting for his life. He started getting symptoms about 2 and a half years ago. He became very bloated, had unexplained weight loss, a hard lump in his stomach and blood in his stools. After many diagonistics of constipation, Anton was sadly diagnosed with bowel cancer 18 months ago. He had an operation and Chemotherapy in 2016 which at the time seemed successful as he was assured by the doctors that the cancer had been removed. Unfortunately, the cancer was extremely aggressive and came back with avengance after a short period of 3 months, as well as a new growth in 1 of his lungs.

After Anton's 1st diagnostic, he changed his diet and removed all the things he loved, in order to give himeslf a fair chance. He gave up his favourite meat and instead lived on an alkaline diet with no sugar. Although extremely difficult for him to do, he did it in the hope that it would help in the eradication of his cancer.

Unfortuntaly this hasn't been the case. Anton has suffered ongoing pain and discomfort and most recently underwent a colostomy as he suffered a blockage of the colon. On the 10th July 2017 Anton was told by doctors that there is nothing more they can do for him to preserve his young life and as a result referred him to the palliative team, Anton has stage 4 advanced cancer.

As a family, our last hope is sending him abroad to receive specialist treatment for advanced cancer patients. It's heartbreaking to see the ones you love in pain, but if there's hope we're going to hang on to it. We would like your support to help us raise the funds for the cost. Every penny counts so please help us fight cancer. We Thank you all in advance for your support and lovely messages.

We need your help to pull togther to help Anton fight Bowl cancer that has now spread to his lungs. Anton is mentally strong and he will not give up without a fight. We are all praying that he will be strong enough to fly back home to St Lucia to see his family. Love you Anton.