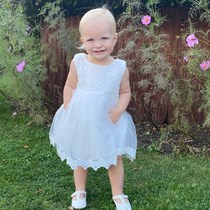 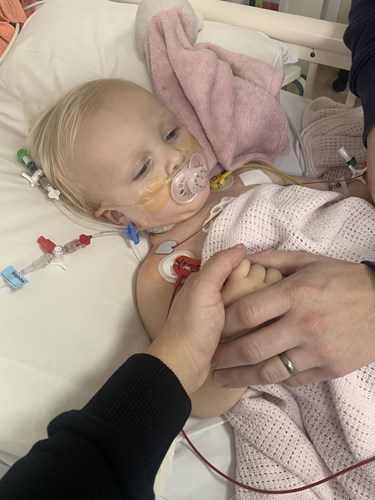 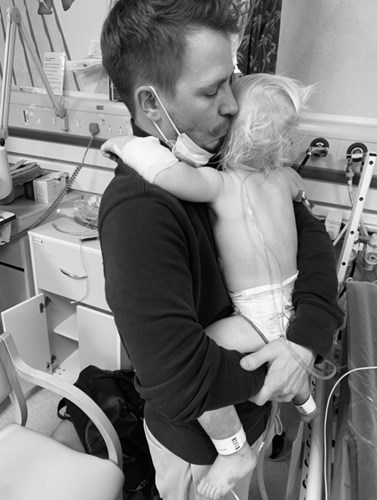 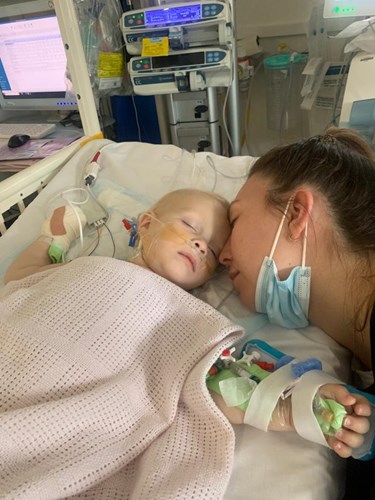 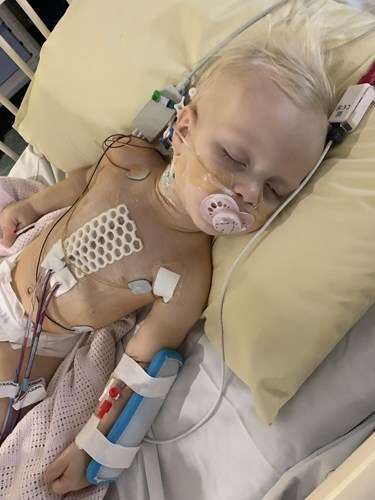 What started out as a normal day, an event unfolded that changed our lives forevermore. I took my daughter Sienna, who was 14 months at the time, to the park, along with her big brother Theo and best friend Kaylie and her children for a play in the park. Sienna suddenly fell very poorly and became unconscious, not knowing what to do Kaylie rang 999 and started performing CPR on Sienna, something she had never done before, whilst being instructed over the phone until the ambulance service arrived.

We later learned that Sienna had suffered a sudden cardiac arrest and there is no doubt that the fast actions of her Godmother Kaylie saved her life that day.

During the ambulance journey to the local hospital Sienna also suffered a seizure and upon arrival her heart rate was beating dangerously high at around 300bpm+. Sienna was rushed into the Resuscitation Unit where a number of Doctors worked tirelessly to stabilise Sienna, which took several hours.

We were admitted to the hospital pending further investigations and Sienna was diagnosed with a heart murmur, a hole in her heart, irregular heartbeat and SVT (Super Ventricular Tachycardia). Due to the complex diagnosis and Sienna's age her case was escalated to The Royal Brompton Hospital.

On 4th October 2021 we had our first appointment (virtually) with our consultant at The Royal Brompton with Dr Leonie Wong, who raised concerns around Sienna's ECG results upon her initial arrival at hospital following the tragic events of 3rd August and advised that further investigations would be required. Dr Wong explained he suspected Sienna had an underlying electrical problem with her heart and we were invited to The Royal Brompton Hospital for further investigations.

Tuesday 19th October, we attended The Royal Brompton Hospital in London for Sienna to have a loop recorder fitted into her chest, this was to provide ongoing monitoring of her heart and to also undertake an ajmaline test to diagnose a very rare and life threatening condition called Brugada Syndrome.

Sienna underwent general anaesthetic for the tests and by late afternoon was back with us, sleepy and full of cuddles for Mummy and Daddy. At this point her consultant Dr Wong came to see us, along with Dr Jan Till, Divisional Director of Children's Cardiac Services and Paediatrics, and this was when we realised things were going to become even more serious.

The Consultants explained to us how during the test Sienna had a very strong positive response to the ajmaline test, which confirmed what we feared most, the dreaded diagnosis of the extremely rare and life threatening heart condition, Brugada Syndrome.

Brugada Syndrome is a genetic disorder in which the electrical activity within the heart is abnormal, which increases the risk of dangerous heart arrhythmias and can cause sudden cardiac death. We now know this is sadly what happened to our beautiful girl in August and we realised just how very lucky we are to still have our precious girl.

The consultants we spoke with believe more people have Brugada Syndrome than the current statistics suggest, however, diagnosis is difficult because it's often only found when a patient has a sudden cardiac death and the cause of death is recorded as exactly that - and not specifically Brugada Syndrome. This campaign is not just about raising money but also to raise awareness of the condition. We, like many others, had absolutely no idea we as a family had this condition until our little girl had a sudden cardiac arrest!

Because there is currently no cure for Brugada Syndrome we were advised the only option to try and preserve her life was to fit an Implanted Cardiac Defibrillator (ICD) into her body. And, this in itself is not a cure, it is simply there to try and help her the next time her body goes into sudden cardiac arrest. We were told how fitting an ICD into such a tiny body carries many serious risks and is by far not an ideal option. We discussed the many (and very serious) risks of infections, multiple surgeries, inappropriate shocks... 'What if we choose not to fit an ICD?' we asked and we were told how sadly it 'really was the only option' to protect Sienna's life.

We will never forget the conversation that day and will never quite be able to describe the unbearable pain that ripped through my body as I learnt the harsh reality of our daughter’s fate. As I held her tiny body in my arms, the tears couldn't stop, it was as though the walls were closing in around us.

Some of the questions we asked...

''how has Sienna got such a rare condition?''

''Have we or Theo (Sienna's younger brother) got this too?''

Some of our questions were not able to be answered because there simply isn't enough information or research on this awful heart condition. I clung to the words 'we aren't banking on losing anybody' as the consultants explained they would do everything they possibly could to try and protect our little girl’s life, but ultimately there's only so much they can do.

We were admitted immediately as it was considered too high risk for us to leave the hospital based on Sienna's diagnosis and her previous sudden cardiac arrest and that arrangements would be made for Sienna to have open heart surgery to implant a defibrillator to her body, and that screening would commence for Jamie and I to establish who this inherited condition came from.

During our stay Sienna fell poorly with sick sinus syndrome and atrial tachycardia at 250bpm and as a result was moved to intensive care. Given the severity of Sienna's conditions, and the limited antiarrhythmic options for Brugada Syndrome patients, it was felt that the implantation of an ICD was the safest option to preserve Sienna's life, and that would take place as a matter of urgency. Sienna's consultant pulled together a team of experts to perform open heart surgery on Sienna within 24 hours, even opening the theatre especially for Sienna on a Sunday...giving her the full VIP treatment!

Following Sienna's surgery, tests were carried out on Jamie and I to determine where Sienna may have inherited this from and it was confirmed during testing that I also have Brugada Syndrome, and this of course means Sienna's brother Theo may also have the condition and will be tested in the very near future. This really is a snowball effect with other family members needing testing to establish if they too have this rare and life-threatening condition. Our lives have literally been turned upside down in an instant - words can't quite describe the shock, fear and sadness that has ripped through our family at this time.

The last three months have been the worst of our lives as we learnt the true extent of Sienna's heart conditions and continue to learn the wider impact on our family. We are truly heartbroken. Our road ahead remains very long, scary and in all honesty, unknown, right now but what we do know is that we have the bravest, strongest, most courageous little girl in the whole wide world and we are so proud of the princess warrior that she is. Sienna has worked so hard to still be here with us, and despite everything she has been through she still continues to make everyone around her so happy with her infectious, beautiful personality.

Sienna has truly shown all of us what it means to love and fight and we will continue to do so for her. We have made a promise to our little girl to work tirelessly to be a part of a breakthrough to beat these heart conditions, and we will not give up, just like our Sienna hasn't.

We are hoping our family and friends will support us to raise funds and awareness of this dreadful heart condition in the hope that one day we will find a cure and that the life of our daughter, and many other Brugada Syndrome patients, will be protected.

We will be arranging plenty of fundraising events next year but for now, I think you'll all agree that our little lady has more than earnt a few pennies to kickstart her fundraising campaign...she's shown more strength and courage in her 17 months than most people in their entire lives so please dig deep and give generously to our very worthy cause. We honestly thank you from the bottom of our hearts.

Thank you so much for your ongoing love & support.