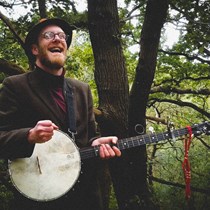 Hi there! My name is Simon Robinson, I am a folk musician and educator, and over the festive period I have been recording a '12 Songs of Christmas' video series with the aim to release an album to raise funds for the independent Pay-As-You-Feel community cafe 'Rainbow Junk-tion'.

Starting on the 25th December, I will be arranging and sharing on my Facebook page and Youtube channel a mixture of festive folk songs and carols on the banjo, dulcimer and guitar, as well as roping in a couple of my friends to play with me! When the 12 days is up, I will be releasing the audio as an album for Digital download via my Bandcamp page, and anyone who donates will be sent a download link to access the album.

This winter is going to be especially tough for a lot of vulnerable people, and I wanted to give something back to local grassroots charities that are working with those in the local community who are most at risk. Rainbow Junktion is one of many cafes that intercepts food that would otherwise go to waste from supermarkets, restaurants and a number of other sources, and turns it into healthy, nutritious meals for anyone and everyone on a pay-as-you-feel donation basis. It would be amazing to be able to raise some money to help those who need food the most in my local community.

If you can donate any amount of money, you will be entitled to a FREE DOWNLOAD of the '12 Songs of Christmas' album from Bandcamp. The Cafe and the people behind it are doing amazing work and if you can spare any change at all, I know it will be very gratefully received and will go to those who need it most at the toughest time at the end of this toughest year.

Thanks for all your support everyone!

Simon Robinson is a folk musician, music educator and workshop leader from Yorkshire, who plays a wide repertoire of traditional music, ranging from American mountain songs and ballads, British folk songs and blues and spirituals.