Weʼve raised £11,032 to Build a special Trike for Simon Weston 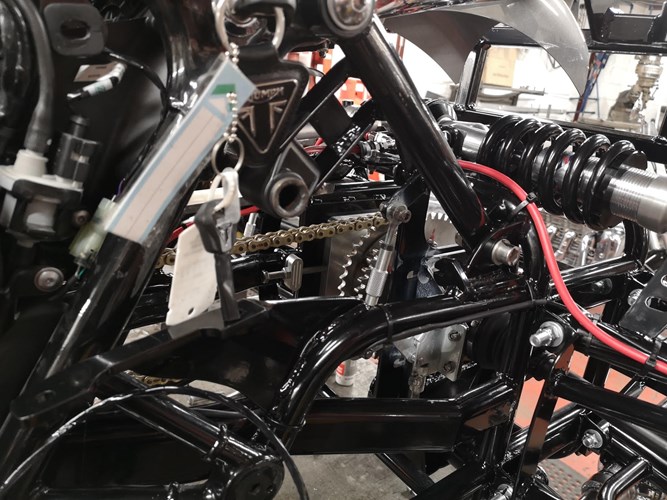 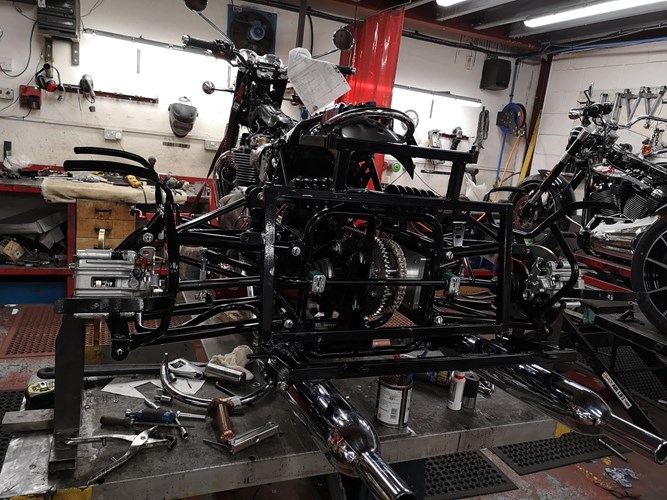 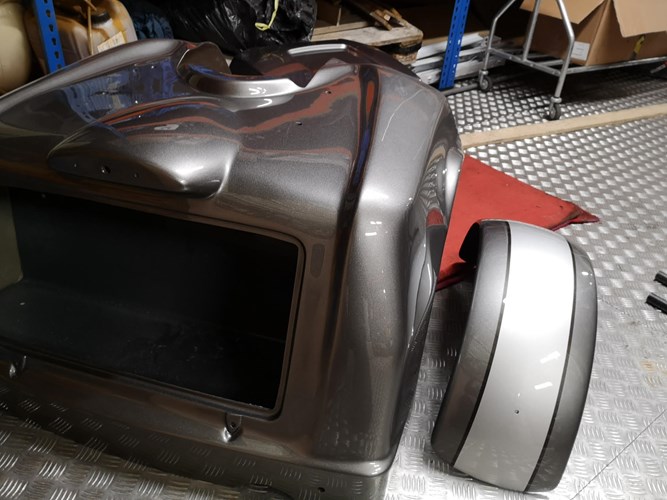 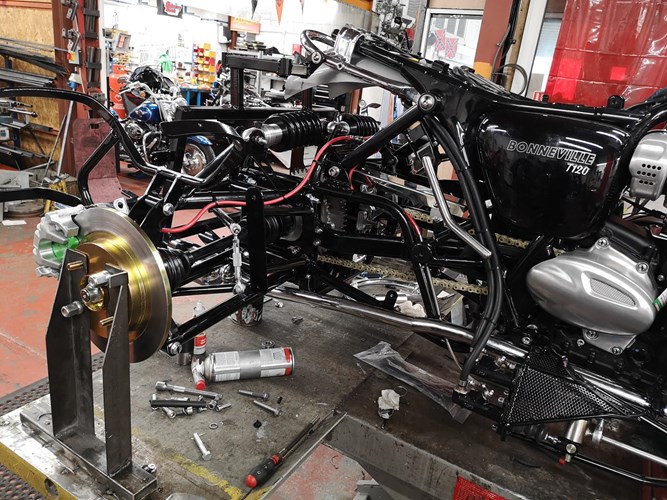 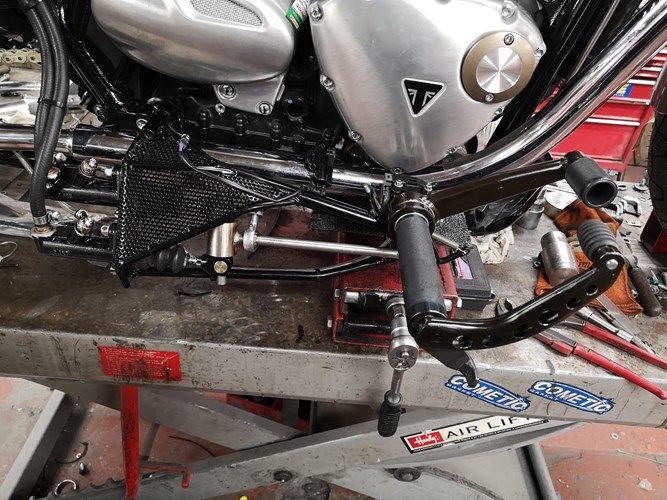 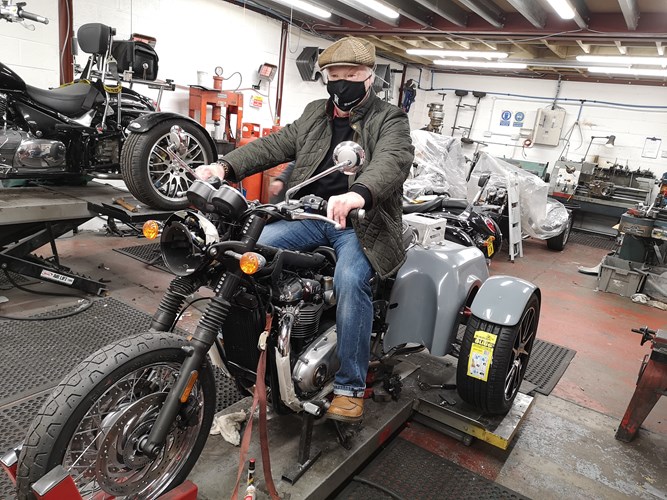 1st Oct After a meeting with Simon at Trike-design to discuss the technical aspects of the build with Owner Hank and Head Fabricator Robin ,work begins, starting with the yokes being removed by Aaron and sent to Roy at Billet Bike Bits, who will craft us a bespoke set of Billet Aluminium Easy-steer Yokes. 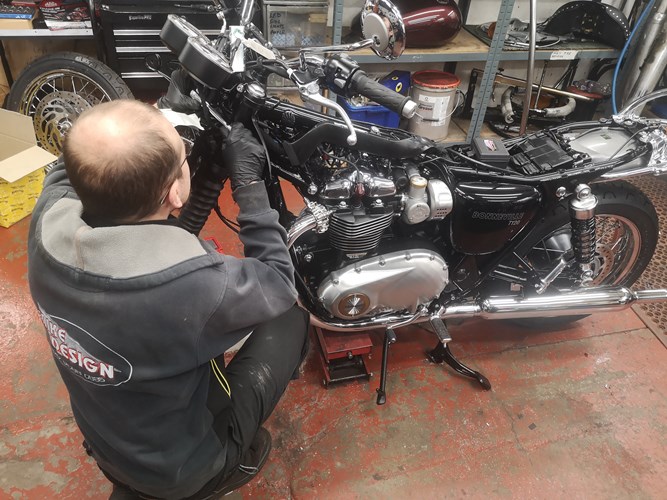 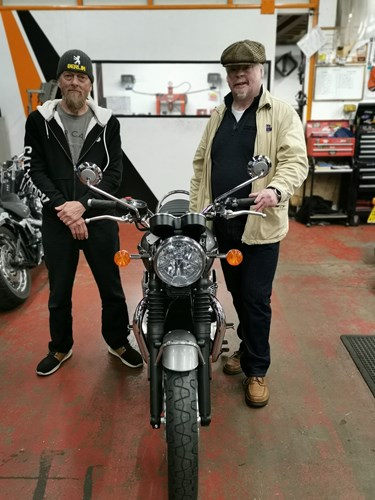 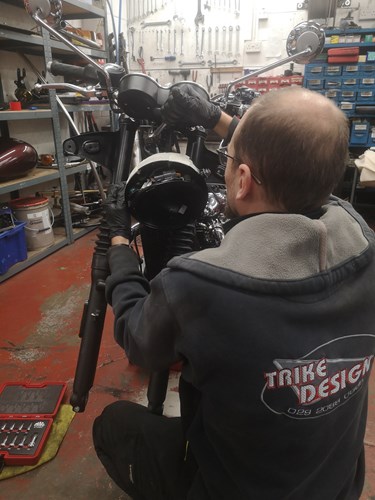 Triumph Owners Motorcycle Club is giving £2000 to the project 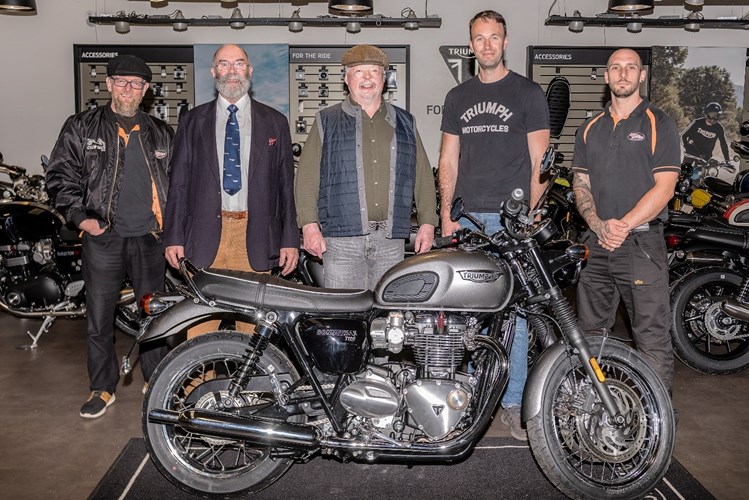 Simon collected his donor bike from Bevan's of Cardiff on 3rd September.

Behind the bike are, from left:- Hank of Trike Design, Norman Hyde, Simon. Charlie Bevan, Paul of Trike Design. We are very grateful to Triumph for providing the bike that will be the basis of the trike. Simon will use the trike to raise awareness of & to help, disabled people. He will have no financial gain & the trike, in the future can only be disposed of, in a way that will help disabled charities.

Falklands veteran Simon Weston hopes to realise a lifetime’s ambition to ride a motorcycle, thanks to a campaign being launched by industry veteran and record-breaking rider Norman Hyde*.

“I was at a reception, saw Simon & just had to talk with him, inspired as I was, by his triumph over adversity, and his amazing resilience, “ explains Norman. “He told me of his desire to ride a motorcycle and I thought that, with help from fellow riders and friends in the industry, we can make his dream come true."

The injuries that Simon sustained on Sir Galahad in 1982 make it impossible for Simon to operate the controls on a traditional bike so Hyde, who worked as a development engineer for Triumph in the Sixties and Seventies, came up with the idea of a modified trike.

"I have always wanted a bike, but wasn't allowed one when I was younger” explains Simon. My injuries (Simon has endured 70 operations!) prevent me from operating hand controls on a normal motorcycle, so could never ride one. This makes me more passionate than ever about the sense of freedom that riding a trike would give me"

Norman has already received backing from Triumph Motorcycles, who have donated a new T120 Bonneville to be the basis for the trike, which will be built by Trike Designs in Simon’s home town of Caerphilly.

Converting a standard road bike to a trike, specially adapted for Simon’s needs, is a lengthy and expensive operation. Norman has already received offers of support from fellow-motorcyclists impressed by Simon’s determination and charity work, but more funds will be required to complete the job. If you would like to support the campaign ....

Total project cost is estimated at circa £25000.

You will be kept in touch, showing the progress of the project.

*Norman Hyde captured the World Sidecar Land Speed Record in 1972 on his Roadrunner III 850cc Triumph Trident powered outfit, at an average speed of 161.8 mph, a record that remained unbeaten for over 35 years.

Very many thanks from Simon & Norman