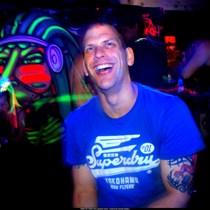 In August 2004 I was involved in a traffic collision whilst riding my motorbike which resulted in my right leg being amputated above the knee. Following the accident, I spent 3 months in hospital, & had 10 operations, including a hugeskin graft to cover the wound on my stump post amputation.

I was discharged from hospital at the end of October & was fitted with a prosthetic leg in December. My recovery was quick, & I adapted to using my prosthetic leg fairly quickly & was able to go on holiday to America 6 months later on my own with no mobility aids.

After this, things started to go downhill; A few months later I had to have an operation to remove some bone infection which resulted in another 2 weeks in hospital & not being able to walk for another 3 months after wards. For the next 5 years I was in & out of hospital for operations on my stump due either complications with infections, or having to move tissue around to make wearing a leg more comfortable, or even possible.

In 2 years (2010 & 2011) I had another 5 operations, 2 of which were emergency cases due to complications & I spent Christmas 2011 in hospital. I took the decision then to stop having further operations, as every time they operated, they had to remove bone from the end of my stump, which was leaving me with a shorter & shorter stump.

So for the last 6 years or so I have mainly been using crutches to move around, but due to the constant wear on my right elbow, (as well as the added issue of having shortened right collarbone from where I broke it as a teenager), as well as the rest of my joints taking the extra load, it is becoming harder to be mobile due to constant pain. The prospect of having to use a wheelchair for mobility is becoming more & more likely, & sooner & is not something I am able to face up to at the moment.

The only option I have, is to have one last operation for a procedure called OsseoIntegration. This is essentially where they put a huge bolt into the femur in my stump, which permanently sticks out through the skin, & my prosthesis would then attach to this bolt. As a result it would bypass all the issues caused by the location (or not) of soft tissue in my stump.

The reason for this campaign is to help raise funds towards the costs of the surgery (circa £50,000) & to pay for a prosthetic leg (circa £20,000), which is essential to my safety whilst walking. This process is not available on the NHS, & despite clinical trials taking place, NICE are yet to approve the procedure for those with amputated legs.

A benefactor has lent me the funds so I can have the operation sooner rather than later, which will improve my life dramatically and prevent me from having a life in a wheelchair. Anything you can donate, no matter how small will help contribute towards repaying this amazing person, & I cannot thank you enough for your generosity; for which I hope to repay one day, in some way.

Please visit the Facebook group for all updates & planned events:

The reason for this campaign is to help raise funds towards the costs of the surgery which will be in Australia (circa £60,000) and to pay for a new micro processor knee (circa £15,000), which is essential to my safety whilst walking as it reduces the likelihood of falling