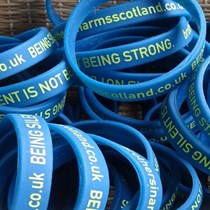 Weʼve raised £4,644 to raise awareness of men's mental health for the charity Brothers in Arms

After a devastating start to the year, having lost our dearly loved Craig, my sisters and I have decided that throughout the year by doing various fundraising we would like to raise money for the charity ‘Brothers in Arms’.

Brothers in Arms are an organisation set up in 2017 that is dedicated to raising awareness of male mental health. In 2016 suicide rates within Scotland increased by 6% compared to that of England and Wales that saw a decrease in rates. It is the first of its kind within Scotland committed to highlighting the high rates of suicide with men making up 75% of all suicides in the UK and is known to be the biggest killer or men under 45.

In order to tackle this huge problem Brothers in Arms aim to “create a platform that reflects the needs of the 21st century man trying to make sense of the modern world”. They offer a digital service in the form of a free app designed to be used by men of all ages that provides support in the form of coping mechanisms in order for them to deal with their own mental health needs.

We are hoping to raise £3000 but more importantly raise awareness and hopefully work towards breaking the stigma of men having to be in control at all times which may prevent them from seeking help when they need it! Over the next year we plan to create a 2019 calendar featuring the ‘Hunks fae the Hills’ as well as selling raffles and a sponsored walk.

Our sponsored walk GLASS2GLENBUCHAT will take place on the 23rd of June where 7 of us are planning walking from the bridge just before Belcherrie in Glass to my front door in Glenbuchat which is approximately 27 miles.

Please help us reach our goal by donating anything you can for a great charity.

Being Silent is not Being Strong.

Sisters fundraising to support their Brothers