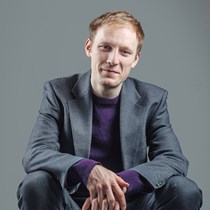 Weʼve raised £2,163 to support a musical journey of celebration to bring live music to those who rarely get to experience it.

We need your kind donations to help fund an epic musical homage to British composer, Ralph Vaughn Williams, on the 60th anniversary of his death, and raise awareness of the vital work of Yehudi Menuhin's charity, Live Music Now. This wonderful charity works to bring live music to people who otherwise would not have access to it, especially older people in residential homes, living with Alzheimer's or dementia.

Stopping in locations along the way, David will bring a gift of music into the hearts of all he meets by street busking, visiting care homes, and scheduling concerts everywhere, from cathedrals to cafes, with a portion of all collected money going directly to Live Music Now.

A real-life British lone wanderer for the 21st century, David's epic travels and how this journey through land that inspired Vaughan Williams will be caught on film. We will create a documentary entitled "Baritone on a Bike" that will trace the way David's often solitary journey deepens the material he'll be singing, and show how music can make a difference in big and small ways to everyone's life. Each donation will ensure the donators' names will receive a thanks in the credits and we hope to eventually screen the documentary nationally.

Even the smallest donation will make an impact on David's ability to completes his journey and spread the word about the charity, Live Music Now. We invite you to be a part of bringing music to people who would otherwise not have access to it. .