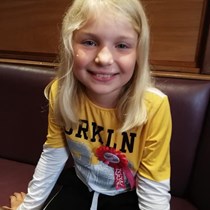 This page was originally set up to help raise funds to support Sophie on her journey to fight cancer, as well as providing extremely important funds for research into this rare form of the disease in children. The main charity we are raising money for is Alice's Arc Charity which is dedicated to funding research into finding a cure and less harsh treatments for Rhabdomyosarcoma. Unfortunately no cure has been found for Sophie's cancer, but we are determined to ensure Sophie achieves her bucket list, leave a long lasting legacy and as a family we will continue to raise funds for Alice's Arc.

Sophie's story is below:

In August 2020 Sophie had just turned 9 and was extremely excited about going back to school after COVID19 prevented her from seeing her friends for 6 months.

Sophie had been suffering from tummy pains in the past 6 months but Doctors kept thinking she had IBS or food intolerance. On Friday (4 September) things took a turn for the worse and thankfully my sister took her to A&E and this is where the journey begins.

We were informed Sophie had a lump that needed to be removed and the operation was arranged for Thursday (10th September). The operation took 7 hours and the consultant had the awful job of telling my sister that when he operated they found a very different tumour to what it looked like on the MRI. It wasn't stuck to the ovaries at all and they all remain in tact. What he did find was a tumour that had become stuck to parts of Sophie that couldn't be removed.

He did manage to remove 95% of it but the parts left he couldn't remove without doing long term damage. He explained that it now looked extremely likely this was a very rare soft tissue cancer. We needed to wait until the biopsy came back with confirmation and the grading etc to determine the treatment plan but this was going to be a tougher cancer to fight than the one he originally thought it would be.

Sophie is a beautiful, strong, funny and brave girl and with us all behind her we hoped she going to kick cancer's butt, but unfortunately this was not meant to be and sadly in June we received the awful news that the cancer was now terminal

Please consider donating anything you can to help support Sophie with her bucket list and raise vital funds for the charity through this very tough time.