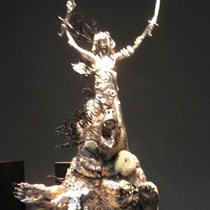 Weʼre raising £4,000 to Help us get our Sheffield Steel Junior Rollers (SSJR) to the Junior Roller Derby World Cup 2020!

While there have been several World Cups for the adults, the first Junior Roller Derby World Cup for under 18s was held in Philadelphia, USA in July 2018, with one of our SSJR players selected to represent Great Britain.

Since then, junior roller derby in GB has become increasingly popular, with new teams forming and competing in junior games across the country.

The second Junior Roller Derby World Cup will be held in Regina, Canada from 14th – 16th August 2020. SSJR are incredibly proud to say this time FOUR of our skaters - Eilidh Murray-Stringer, Lola Drake, Milly Thomson and Polly Hallam have been selected for the squad representing Great Britain. This is a fantastic achievement and shows how the junior sport and the SSJR team have grown over the last two years to the point that Team GB are entering two junior teams in the 2020 world cup.

However, attending this once-in-a-lifetime event is not cheap. Flights, hotel rooms and food over the duration of the tournament will present a significant expense for each of the skaters’ families. It is estimated that it will cost £1000 for each skater to make the trip. SSJR are therefore helping them to raise as much of the £4000 they need as possible. Any money received will be split evenly between the skaters.

This is a unique opportunity for these young skaters. While junior roller derby is not a gender-specific sport, we feel that it’s important to note it is one of the few sports that provides the rare opportunity for juniors of all genders to compete on equal footing.

But we need your help. Together, let’s do our young Sheffield skaters proud and help get them to Canada, where they can prove to the world that they are as good at roller derby as we already know they are!

Also remember, our juniors could go on to compete at future women’s or men’s roller derby word cup as adults and you could watch this, feeling great that you helped them along their way :))