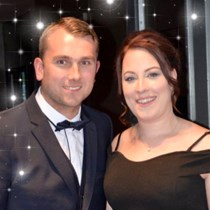 Weʼve raised £205 to help my dad join us on our family honeymoon for the holiday of a lifetime and to raise awareness of his very rare condition FTD.

For those of you that don't know, I will explain the story of how my dad has been diagnosed with FTD (Frontotemporal Dementia).

In July 2016, whilst working, my dad's car was hit on the motorway by a lorry and this resulted in him having to take 6 months off work which were unpaid. The accident was not his fault and he was very lucky that he was able to walk away from it but from that day we noticed a change in my dad. However, after a very long wait, numerous doctors appointments and him not being able to go back to work until he had a diagnosis, we finally found out that my dad had a very rare form of Dementia, which is Terminal. It is so rare that even the doctors have very little knowledge about it and he has to see a specialist from London.

This was a huge shock to us all and a lot for us to take in but is something that we will now all have to live with, whilst watching him deteriorate every day.

The symptoms of FTD started a few days after his crash and have significantly got worse since then. However, as we are not able to say for certain that the crash has caused the condition or progressed the symptoms, my dad will be lucky if he can prove that the other driver was at fault to claim whiplash, which is not very much to say this crash could have reduced his life by years! As soon as my dad was given the diagnosis, he was medically suspended from his place of work and has since been dismissed on medical grounds. He now has no income and my mum has had to go learn a completely different role to try and get some income for them both to survive, a role she will at some point have to leave to care for my dad full time.

So through no fault of his own my dad has found himself with no job, no car, no independence and no idea how soon this condition will take his life. Even the simple task of preparing a meal for himself is no longer possible, so not only is this condition affecting my dad but the whole family, having to help look after him and watch him deteriorate.

For this reason when myself and my fiancé get married on New Years Eve this year, we have decided to make our honeymoon a familymoon. This will mean the whole family can go and enjoy what could be our last holiday together but are understandably struggling to afford to get my dad there.

I understand that there must be so many people that are in a similar position to us, that have worked all there lives and then when they finally need some help they have no idea where to go or who to turn to, to see what they are entitled to. It makes it even harder when the condition he has is so rare that not even the doctors over here have extensive knowledge of it. For this reason I would love to raise enough money to help get my dad on this holiday, but also any extra money we get, I would love to donate to raise more awareness about this condition and help fund the research into the devastating condition.

Thank you for reading our story. Asking for donations is not something we feel comfortable doing, and wish we didn't have to, but want to make sure we do anything we can to make the rest of my dad's life as enjoyable and as happy as we can, so any donation no matter how little would be greatly appreciated. Thank you x