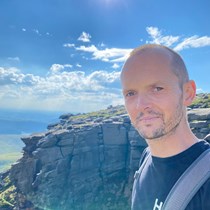 Liam is one of the most well-known faces at Celtic Juniors, he has coached at the Soccer School on a Saturday morning for over ten years, he coaches the pan-disability team, and has worked with hundreds of players during his time at the club. When he isn’t at football training he is most likely running up and down the hills around Tameside in what little free time he has!

He will be running the Bullock Smithy race, a 56 mile ultra marathon starting at midday on Saturday 4 September. The race is a circular route starting and finishing in Hazel Grove which takes in some of the Peak District’s most stunning landscapes including Edale, Castleton, Milller’s Dale and Macclesfield Forrest.

Liam has been a keen runner for several years but has never taken on a challenge this big.

It is the club’s goal that every one of its teams has access to a defibrillator on matchdays and at training. Once teams move to from mini-soccer at centred venues to youth football they play home and away games on grass pitches. Most of these council owned grass pitches have no onsite defibrillator.

The club want to raise enough money so that they can buy defibrillators for every one of its teams playing at these venues. The defibs will stay with each team’s coach and so will be available at pitch side home and away, and at training.

A volunteer-run junior football club for players of all abilities since 1975. An FA Charter Standard Development Club