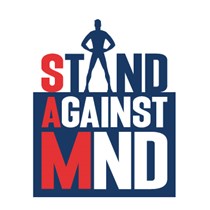 Weʼve raised £18,336 to fund research into a cure for motor neurone disease (MND) and support local hospice care for those affected by MND.

Hi, my name’s Sam Perkins, I’m 38 years old and from Nottingham. I’m an ordinary person, I’m a husband to my wonderful wife Emma, a son to my amazing parents Helen and Alan along with my stepfather Nick, a brother to my sisters Rebecca and Victoria along with my step brothers Tom and Will, and an uncle to my beautiful nieces Erin, Florence, Lily, Erica and Holly, I’m no different to a thousand other people you’ve met, except in March of this year I was diagnosed with a terminal illness. This is my story.

I was born in Nottingham in 1981. I had an active and happy childhood, playing in the street with friends, building dens, and supporting Nottingham Forest football club, something I still do to this day! I attended my local comprehensive, and eventually got myself a degree from the University of Sheffield. Going on to build a career helping companies obtain funding for research and development. I’ve always enjoyed sport, whether it be playing or watching. I like to think I can hold a conversation on anything from snooker to golf to cricket to baseball, and have come up with a few answers at pub quizzes over the years that justify that opinion!

Over the last 10 years or so my main hobby has been triathlon’s so I’ve been keeping myself pretty fit. I’ve competed in almost 40 races, have run in lots of half marathons, completed the Robin Hood Marathon and have even finished two Ironman races including the Nottingham outlaw. I was never the fastest or expected to win but I loved the challenge and as a hobby it helped me discover what I was capable of and the determination I had inside.

About 18 months ago everything started to change, at first I would notice small muscle tremors in my arms and my legs, and then I started to get short of breath. By November I found I was unable to celebrate goals at football properly because I couldn’t use my lungs to shout and celebrate as I normally would. I’d started to struggle with the steps to get to my seat in the stadium. After this my ability to sleep became non-existent and I would wake after less than an hour without fail. I had been to the doctor and was undergoing tests but it didn’t look like an answer would be revealed any time soon as to what was going wrong with my body.

Eventually in March of this year I started to look so rough that Emma insisted I go to hospital, and she hates hospitals! I was admitted and the doctors discovered pneumonia but my diaphragm had become so weak that I was unable to clear the fluid from my chest. This caused me to collapse on the ward and I was taken to intensive care where Emma came to see me.

On 6 March 2019 I was visited by a consultant neurologist who gathered Emma, Mum, and Dad around my bed in the critical care ward. He then said the words that I will never forget, “Mr Perkins I’m very sorry but I’m afraid you have motor neurone disease”

Being diagnosed with a serious illness wasn’t something I’d given a lot of thought to before those few months and when it happens my instinct was to ask: so what do we do now? And I expected the conversation that followed to focus on treatment options, the likelihood of success, and how difficult the path ahead may be for me and my family.

But with MND that just doesn’t happen. I was told that I was very young to be going through this but unfortunately there was nothing that could be done, that the disease was terminal, and that the rate of decline I would go through was unknown.

One thing I now know is that half the people who are diagnosed with this disease die within two years of being diagnosed. If I were to fall into that bracket that would mean I won’t make it to my 40th birthday.

MND isn’t a common disease, but it’s not as rare as people think. Across our lifetimes it will affect one in 300 people. MND can take many forms and in my case it affected my ability to breathe independently first and is now starting to weaken my limbs and my coordination. It means that now, just nine months after diagnosis I am only able to sleep with the aid of a ventilator, use wheelchairs to move myself around, and not able to feed or bathe myself, and need to be cared for 24/7.

In others it can affect speech, the ability to eat, or the ability to walk first. Eventually it’s likely that all of my muscles will not work properly or all, it’s common for sufferers to only be able to communicate the thoughts of their fully functional brains through the movements of their eyes, and I am already starting to bank my voice in preparation for this.

The diagnosis is devastating and isn’t just mine it’s my families my friends, everyone around me has been affected by it. But the support we’ve received from staff within the NHS, community care teams, and the staff and volunteers at Notts Hospice has been phenomenal. Without it we wouldn’t be able to continue enjoying life as much as we do.

MND isn’t incurable, we just haven’t found a cure yet. And MND isn’t common, so research into a cure isn’t widely funded. I want to change that.

I’ve tapped into my inner determination and I’m looking forward and with the support of my loved ones we’re launching this charity to raise funds that will pay for research into a cure and help to fund Hospice care for those affected by MND. Along the way we want to continue to raise awareness of this disease and its effects to make finding a cure a priority, maybe this won’t come in time for me, but if it makes even the smallest difference other sufferers then it was worth doing.

We still don’t know why the majority of people who develop this disease get it, and as I said at the start, I am an ordinary person, so if it can happen to me, it can happen to anyone, and there’s no way of knowing who or when.

So join with me, and Stand Against MND.

Raising funds for research into a cure for motor neurone disease (MND) and local hospice care for those affected by MND (registered CIO no:1187436).