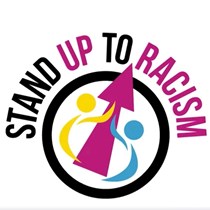 Stand Up To Racism

Weʼve raised £1,455 to Build antiracism - Boris Johnson is not my PM

With Boris Johnson as Prime Minster, an ally of Donald Trump in the Whitehouse we need to build antiracist resistance more than ever

We stand firmly with the four congresswomen attacked by Trump, and for all those who are suffering the fallout of the policies of Trump and the Tories, from refugees, to migrants, to the citizens affected by the Windrush scandal.

It is a sign of the levels of racism—particularly Islamophobia—being legitimised here that Boris Johnson felt able to state that Islam has left Muslim countries "literally centuries behind" the West. He has described Muslim women who wear the niqab as being like Bank Robbers, and described black people 'piccaninnies' with 'watermelon smiles. With the recent growth of violent far right movements, it’s dangerous that mainstream politicians are fanning the flames of divisive scapegoating. Lets say loud and clear that racism is not welcome here.

Stand Up To Racism is building a mass movement against racism, Islamophobia, antisemitism and fascism.  But we need your support and your donations to make it happen.  This year we fundraised for the highly successful campaign to challenge Tommy Robinson.

What is clear is that we need solidarity with all those who find themselves targets of Trump and Johnson. Every penny will help us challenge every instance of racism, Islamophobia, antisemitism and fascism.

Stand Up To Racism started crowdfunding

Stand Up To Racism

Stand Up To Racism is a national campaign which works with all those who want to challenge racism in all its forms. We hold national conferences, marches local events and run local groups. For more information please see www.standuptoracism.org.uk