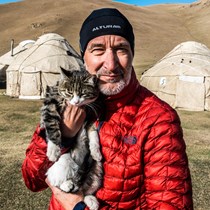 Weʼve raised £1,945 to Please help a child keep her precious mum around for as long as she can. We are looking for funds to care for a mum diagnosed with cancer.

12/12/2019 UPDATE* Thank you to everyone that has donated to support this family. Everyone will be pleased to know that Simon and Padme will now be flying to the UK thanks to your generous donations and will be arriving on Wednesday 18th December 2019. Thank you all again.

17/10/2019 UPDATE* Thank you so much to everyone that has supported this cause so far. Sadly, however Sunan passed away this morning. She was rushed to hospital a few days ago with pneumonia and I believe she was too weak to survive it. The fight is now somewhat different as Simon and his daughter are now stranded in Thailand with no money at all. He was down to £60 when I spoke to him this morning. We are looking to raise funds to fly Simon and his daughter to the UK. Please give as much or as little as you can. To put it simply, the situation is now 'urgent'. x

UPDATE* I've had to place this update here as there simply wasn't enough space in the update box. Today Simon and Sunan received the dreadful news that even radiation therapy will not be possible. Sunan has been given 1-3 months to live. The cancer has advanced rapidly and is now in her bone marrow. I was afraid to say it before, even afraid to think it but this is terminal and the family are devastated beyond words. Simon has lost his job due to literally no fault of his own. Just the inability to be in two places at the same time. Thank you so much to everyone that has given so far. It’s seems however that we need your help much more urgently than ever now due a very serious change of circumstances that could never have been planned for. Simon and Padme (on top of everything else including future funeral expenses) need to plan to leave Thailand in the coming months. This will mean getting a passport for Padme, flights and getting a job in the UK. There is literally no income coming into this household and the family could end up on the streets in a matter of weeks. Please, please, please help. If that sounds like begging then it’s because it probably is. Thank You. Ruth, Simon, Sunan, Padme, Our Friends … and Me. ♥️ x

Please help a child to keep her precious mum around for as long as she can. I have set up this fundraiser to try and help a friend’s sister raise money to help her brother, his wife, and their daughter. We are looking for funds to help with palliative care of a young mum diagnosed with cancer. Our friends have done all they can, and the limited amount we had in another fundraiser has now gone. We are now appealing to the wider world for support at this most upsetting time.

Ruth Mills lives in the UK and her brother Simon Mills lives thousands of miles away in Thailand, where his family situation is desperate to say the least. We are a looking for help to provide care for his wife aged just 42!

Simon is married to the lovely Sunan and has been for 15 years. They live in Thailand with their daughter Padme who is 10 years old. Sunan is very sick and was originally diagnosed with adenocarcinoma in her bowel. Sunan had an operation recently to fit her with a colostomy bag, and she was due to start chemotherapy soon. The situation has now unfortunately changed rapidly - and for the worse.

Last week they received the terrible news that Sunan's cancer has spread further into her body and the stage 4 cancer is now in her spine, lymph nodes and groin. Her oncologist has told Simon that she has a year at best. She is terrifyingly thin and too weak to have chemotherapy, which would shorten the time she has left to possibly as little as 3 months. Surgery is also not possible and radiation therapy may be the only course of action left - if Sunan is strong enough for it. Although miracles do happen, it appears that we are now looking at pain relief and other palliative care. But we'll take that miracle if we can get it!

Simon works as an online English teacher in Thailand and only gets paid when he works. He has been unable to work as he has been taking care of Sunan and Padme. They don’t have any savings and he is struggling to feed them as he cannot work due to the worsening circumstances. Although they live in a relatively large town, the hospital facilities are basic and Simon has had to provide basic nursing care due to lack of nursing staff. Sunan and Simon will have to find some way to travel to a hospital in another province and the only trip where an ambulance will be provided to do this is the first one. Beyond that they will have to pay.

At this present time, they haven't told their daughter Padme how serious it is. She has shut down and is finding it very difficult to talk to her dad about what the family is having to endure.

They have no family support out in Thailand, and were hoping to move back to the UK this year to be closer to Simon’s sister, Ruth. That was before Sunan became ill. Now the more likely option is that Simon and Padme may need to come back to the UK - ready or not - without Sunan.

Simon has had to take time off to look after Sunan as she has been in so much pain, and has received a threatening letter from his employers because he hasn't been able to work. He doesn't get compassionate leave, so if he doesn't work there simply is no income. He can't afford to lose his job, even though at the moment he isn't able to work as many hours as usual. We need to find a way to keep a roof over their heads and the bills paid while he takes care of his wife and spends as much time with her as he can.

We are so worried for them all.

This appeal is desperately urgent. Simon is barely able to feed his daughter as they have very little income. He will have no money to be with his wife when she goes for treatment, and cannot afford to pay the rent on their home. If you donate to this cause, you will be putting food in a child’s stomach, keeping a roof over her head, and enabling a father to spend time with his wife at this terrible time. And probably most importantly you’ll be making what appears to be a young mum’s limited time on earth the best it can be under such awful circumstances.

Please give as much or as little as you can. It will be appreciated beyond words. We would also be hugely grateful if you could share this Just Giving page with as many people as you can.

Please show us that the world cares.

I have set up this fundraiser to try and help a friend’s sister raise money to help her brother, his wife, and their daughter. Our friends have done all they can, and the limited amount we had in another fundraiser has now gone. We are now appealing to the wider world for help.