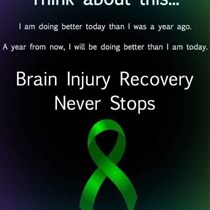 Weʼve raised £4,070 to help raise funds for specialist physio & hydrotherapy to help Steve walk after 4 years in a wheelchair.

Nothing can prepare you for a phone call like the one I received on 23 December 2014. It was from my son’s girlfriend In Thailand to say my son Steve had been found unconscious at 2am on the side of the road with severe head injuries.

Straight away, we had to organise a private Medi plane to fly Steve from where he had been found in the coastal village of Krabi to Bangkok where he could get treatment. We also had to find three seats on a plane to Bangkok on Christmas Eve with less than 24 hours’ notice.

After two and a half weeks, Steve was still in a coma in Bangkok but the hospital gave the go-ahead for us to fly him back home to the UK where he could receive continuing care. On 9 January 2015, we arrived back in the UK with my son who had remained comatose through it all.

The costs of the private Medi jet came to £13,000, then the Bangkok hospital charges were another £20,000, and the costs to fly him home with a doctor and nurse from Thailand came to £19,000. Not surprisingly, this, along with the cost of our own flights, wiped out our savings – and forced us to borrow from friends and family.

After five and a half weeks hospitalised in Taunton, Steve eventually began his slow ‘wake up’. Gradually, over a period of months, he began to show signs of movement in his right side, and after six months we finally got a smile from him. Whilst that was a very special moment, he still had not uttered a single word – and hasn’t done so to this day.

Steve spent a total of nine months in the brain rehabilitation unit at Musgrove and later at Dean Barton Rehab Unit in Cotford St Luke before they relocated him. Unfortunately, his progress was considered slow and we were told that he had entered a plateau stage and they were not in a position to continue his rehab because of financial constraints.

This caused me many sleepless nights and I really wanted him to come home, but everyone was telling me that I just wouldn’t be able to cope. I had to do what was best for Steve and listen to what those around me were saying – to let him go into a nursing home. His first day at the home was just awful; I stayed with him for seven hours and didn’t want to leave. I vowed I would find a way to give him a better life, and last September we finally managed to do that for him, moving him into Alfred Court, where he lives with three other men and their carers.

This has been a long, exhausting journey for Steve’s family. But at no stage have we ever stopped believing that his health would continue to improve.

Now, we need to raise a total of £5,000 to cover Steve’s special therapy for the next six months. Steve’s family are eternally grateful for all support.