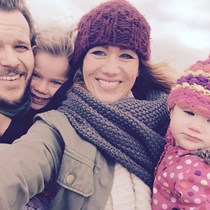 Weʼve raised £235 to Weʼre raising £500 to help fund a paediatric AED machine for Corey and the community, also help towards medical costs, hospital and hospice

Corey Alway was born 2 months early. Since his birth in July 2014, he has spent 6 months as an inpatient in Bristol Childrens Hospital and has just had his 277th day appointment. He has two genetic problems called '16p13.3 duplication syndrome' and 'Kabuki syndrome'. These genetic disorders cause many complex medical problems and developmental delays. He suffers from Hydrocephalus, hearing and sight problems and polymorphic intractable epilepsy. At it's worse Corey will siezure 300+ times a day. Although he has these health issues he never lets them hold him back. There is little known about his genetic problems, and the severity of his epilepsy, so Coreys mum and dad have been advised to build memories with Corey and live each day as it comes.
Steve will be attempting to run from Hartland to Bude on Saturday 17th June, 16 miles along the coastal path. Monies raised will be going towards a paediatric AED machine for home and ongoing hospital and hospice visits.