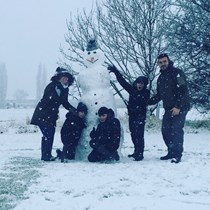 Never was so much owed by so many to so few

Here's our chance to show our appreciation to this veteran and help me raise money to help a WW2 RAF air gunner get his money back and cover his families costs for fixing their window.

A SECOND World War veteran and his wife have had their life savings stolen after burglars broke into their home.

The burglary happened yesterday (Thursday, June 8) between 2pm and 4.20pm at a property in Parkside, Darlington. A window on the back door had been smashed allowing the burglars access to the property and £2,000 in cash was taken.

The victims, a former RAF air gunner and his wife, were not in the house at the time. He is in his early 90s and his wife in her late 80s.

Inspector Chris Knox, from Darlington Neighbourhood Police Team, said: “This was a despicable crime which has left the elderly couple and their family shaken and distressed.

“After what this man has given to the community, he and his wife should be able to enjoy their later life in peace together.