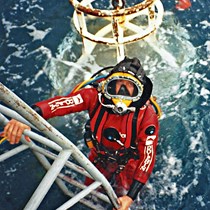 A never before... and probably never again walk up Ben Nevis, the UK's highest mountain in Historical Diving Equipment weighing over 80 kg (176lbs). The 'walk' starts on the 1st September 2018 and will be done in a relay between several different people; taking an expected 4 to 5 days to complete. It will begin at minus 5 metres in Loch Linnhe and finish at 1345 metres, the summit of Ben Nevis. A total climb of 1350m or 4,430ft.

The idea came from Ginge Fullen, a former Leading Diver in the Royal Navy’s elite Clearance Diving Branch, who has combined a career in diving with his passion; climbing the highest mountains in more than 170 countries around the world. Ginge wanted to do an expedition so brutal that it will probably never be repeated again so, after meeting up with Ty Burton, from the Historical Diving Society (HDS), these two like-minded people came together to make this challenge happen.

The HDS has come on board supporting the project with both manpower and equipment. All funds raised will be distributed evenly between; The Historical Diving Society, The local Lochaber Mountain Rescue Team (LMRT) and the family of Saman Kunan, the former Thai Navy Diver who tragically died, while taking part in efforts to rescue 12 boys and their football coach trapped in a flooded cave in Thailand. He lost consciousness on his way out of the Tham Luang cave complex, where he had been delivering emergency air cylinders.

The HDS was formed in 1990 by a group of enthusiasts whose aim is to preserve and protect our diving heritage and to advance the education and interest of the public and other parties in their study of Diving History.

The LMRT depend on the public’s continuing donations and fundraising support as the costs involved in running a mountain rescue team are extremely high. For example, a 800m rope, which might only be safe to use once, costs around £1000.

As a former Navy Diver, the thought of climbing 4430 feet whilst wearing 176lb (80kg) of standard diving equipment sounded crazy. But when the name Ginge Fullen was thrown into the sentence I suddenly understood! The aim being to raise £4,430.00 or £1.00 for every foot climbed.