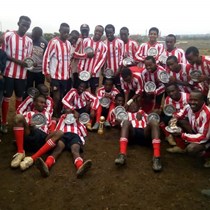 SUNDERLAND AFC KEROCHE ARE A FOOTBALL TEAM & ACADEMY IN THE VILLAGE OF KARAI ON THE OUTSKIRTS OF NAIVASHA TOWN, KENYA. WE RELY SOLELY UPON SPONSORSHIP/DONATIONS/CONTRIBUTIONS FROM SUNDERLAND FANS & FOOTBALL FANS WORLDWIDE, TO KEEP OUR CLUB & ACADEMY ALIVE, AND CONTINUE OUR AMAZING SUCCESS.

UNLIKE OTHER TOP KENYAN TEAMS, WHO ARE “COMPANY TEAMS” WITH LARGE COMPANY FUNDING, WE ARE, TO OUR KNOWLEDGE, THE FIRST EVER “COMMUNITY TEAM” (A team funded solely by it’s donations/contributions and sponsorship, from fans) TO SUCCESSFULLY GAIN PROMOTION INTO THE NATIONAL LEAGUES.

BUT THE COST OF SUCCESS COMES AT A HIGHER PRICE, SUCH AS HIGHER REGISTRATION FEES, HIGHER REFEREES FEES, AND HIGHER AWAY TRAVEL FEES, (Some journeys in Div. 2 are up to 10hrs each way) WHICH IS WHY WE ARE ALWAYS LOOKING FOR EXTRA SPONSORS or DONORS. (See the bottom of this page if you can help in any way, no matter how small or large)

YOUR CONTRIBUTIONS/DONATIONS/SPONSORSHIP HELP TO GIVE OUR TEAM AND ACADEMY THE OPPORTUNITIES IN LIFE, THAT MOST AROUND THE GLOBE TAKE FOR GRANTED.

Sunderland AFC Keroche, began in the village of Karai, on the outskirts of the town of Naivasha, Kenya in 2012.

Karai village is a very poor area, where only 1 in 28 of the adults have a full-time job.

It all began as a way of trying to give the youth of the area a focus in life, to keep them away from life’s darker temptations such as drugs, crime and alcohol etc.

It started quite simply as a group of football loving young men forming a football team, but they had no kit, no boots, and no pitch, but they give themselves the name of Sunderland AFC Keroche for 2 reasons;- (1) The then manager elect was a Sunderland fan, (2) The village sits in the shadow of the huge KEROCHE BREWERY (Kenya’s second largest brewery)

The boys played friendly games against other local villages, but soon realised that they were quite a good team, as they were winning all their games (Even though they were playing in bare feet, on pitches in other villages) So they approached the local village school and asked if they could use their spare land to play games, and erected 2 goals made from tree branches.

One day, the then manager “Paul Kimani” approached a Sunderland fan in England called Gary Lamb (Via facebook) to ask if their was a possibility of trying to donate kits and boots etc. After checking out the team and satisfied everything was genuine, Gary put out an appeal for Sunderland shirts, plus boots, shorts and socks etc. and was overwhelmed by the response, not only items for the football team, but donations also included items such as clothing, bedding, mattresses, children’s toys, bikes, school books, pens, pencils, toothbrushes & toothpaste, and much more, So SUNDERLAND AFC KEROCHE, the school and their village of Karai, became a whole new place.

Village elder Joseph Muchina, has told us that since the project started, that crime in the village area has dropped by over 70% , because all the young children and youths are now attending football training 4 evenings a week. Sadly Joseph passed away on Monday 4/3/2019

We walk onto the pitch to; “Can’t help falling in love with you” #WISEMENSAY

Promoted from District league to Sub Branch league in 2014

Naivasha FA Cup Runners Up in 2016

Promoted from Branch League to National Division 2 in 2018

That is 3 promotions in 7yrs and in February 2019 we shall be competing in the Kenyan National 2nd Division. It also makes us the “Most successful club in Kenya” in the last 7yrs

Our Academy kids have won numerous Cups and Trophies since we were founded in 2012, and in those 6 yrs a total of 31senior academy players have progressed into the senior team, which is a great testament to the senior players, and coaches, who give up their free time to help coach our young talents.

Our Senior Under 20’s academy also hold a 7yr record of ONLY 1 DEFEAT since our club were formed in 2012.

Since the SUNDERLAND AFC KEROCHE project started in 2012, we have achieved the following through donations and sponsorship from Sunderland fans, mainly in the UK

1, The school pitch has been levelled, and seeded to become one of the best pitches in the area. (Voted best pitch in the branch leagues in 2018) In the UK the estimated cost of this would be £20-£30,000, but in Kenya the total cost was the equivalent of £800.

3, Home and away dugouts have been erected.

4, The first team have had 3 promotions, won 14 cup competitions, and been runners-up in 13 other cups. (On the 2nd Dec. 2018 they gained their 3rd promotion, to the Kenyan National Division 2)

5, We now have a thriving academy, currently attended by 108 kids, (Including a few girls) and constantly growing. Please view the academy section of our website at the following link: http://safckeroche.com/academy/

6, We have installed a full fresh water supply to the school, giving the 900+ pupils fresh clean water for the first time ever. (We class this as one of our biggest achievements to date)

7, So far 31 senior academy players have progressed into the 1st team squad.

8, Six first team players have progressed to Kenyan premier league and super league teams, and now make a living through football. (Which is one of our main aims)

9, To our knowledge, we are the only Kenyan football team outside of the KPL (Kenyan Premier League) to have our own worldwide website, which was built and funded totally free of charge by ANDRE BOMAR our I.T. genius from Atlanta, Georgia, USA. This has helped us greatly to secure a number of Main sponsors, as we can offer them free advertising in return for their sponsorship. It also gives YOU OUR FANS the opportunity to find out all you need to know, about our club & academy

10, One small corner of Kenya has become red & White crazy and our fanbase continues to grow, due to our success.

11, From our humble beginning in 2012, We have now become one of the most respected teams in Kenya.

12, We are currently in discussions with AFC Leopards (The Man Utd of Kenya) to become a feeder club for them. (To promote more of our boys into the KENYAN PREMIER LEAGUE)

13, On our visit to Kenya between Dec. 26th – 31st 2018 we secured a deal with a Kenyan National electrical company called SAMTON ELECTRICALS & ELECTRONICS, to fit and supply a full electrical system to Karai primary school (Where our pitch is) Totally free of charge, giving the school an electric supply for the first time ever.

14, On Dec. 31st 2018 our club were voted SPORTS TEAM OF THE YEAR in the Kenyan 2018 Gala awards (Kenya’s equivalent of Sports personality of the year) and our Centre Forward James “Okeke” Ollise was voted “Most Valuable player of the year”

15, On Saturday January 12th 2019, we installed a new smaller sized training pitch, adjacent to our main pitch, complete with smaller 12ft x 6ft goals. This smaller pitch will enable our boys to improve their moving and passing game, with fast 2 touch, 5 or 6 a side games, but it will also be used for our academy kids, and all the 900+ pupils in Karai School, where our pitch is based. This pitch was funded by JAMES STOKOE a Sunderland fan from the Isle of Man, UK.

16, We now stream all our league games live on our teams facebook page, kick-off in UK is 10am UK winter time, and 11am UK summer time. This is our facebook page link https://www.facebook.com/sunderlandafckeroche/

17, On Friday 5th April 2019, we formed a partnership with the BRADLEY LOWERY FOUNDATION, this partnership goes under the hashtag #WEARINGITFORBRADLEY for more information on our partnership, please read the following link from our home page: http://safckeroche.com/2019/04/06/our-partnership-with-the-bradley-lowery-foundation/

18, During the current, 2018-19 season many local teams in the North east of England, have donated their old football kits, which has enabled ourselves to give away to other local teams (Who struggle for kit) in and around the Naivasha region

The cost of funding the whole team and academy in 2018 was £3,200, but after the 1st team gained another promotion to the National 2nd Division, this will rise to £7,000-£7,500 in 2019, mainly down to the extra travelling involved to away games, which will be much further afield, (some will be 10hrs each way, compared to 2hrs maximum previously)

Without donations and sponsorship from Sunderland fans around the world, the team, academy and the extra projects around the school and village would cease to exist.

If you can find it in your hearts to donate/sponsor or help in any way possible, please contact the clubs UK President GARY LAMB on UK mobile;- 07880732078

If all our fans were able to donate just 5 pounds each per season, our team and academy would continue to thrive. Every penny donated goes towards the running costs of the club. No-one takes any form of wages or payment.

Sponsorship packages start from as little as £50 per season (to sponsor a player), and at the top end, to become shirt sponsors, or have the naming rights to our pitch/stadium these are £900. If we manage to raise over our intended target for the 2019-20 season, we already have plans to build an outdoor exercise area, with various exercise stations, which can be used by both the team/academy but also by the schools 900+ pupils. The total cost of this is approx £1,200 – £1,500, a snip compared to what it would cost in the UK.

Please check the “SPONSORSHIP PACKAGES” tab on our home page. or click this link: http://safckeroche.com/sponsorshippackages/