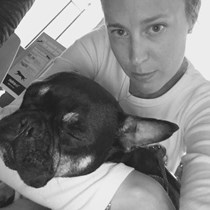 Claude our French bulldog came to join our family of rescue animals when his breeders were advised to put him down because he was born with disabilities. He has a deformity of the spine and neurological issues affecting his hind legs; none of which hold him back, he has a love for life. As you can see he rules the roost.

As usual I signed up for pet insurance. Given Claude's breed and health issues we did have: eye, leg, hip, shoulder, back, spine, neck and pelvic disorders excluded from the policy, as in zero cover. Unfortunately after obtaining further medical history from the breeder's vet report you wouldn't believe it but the exclusion list grew.

Last week Claude became gravely ill. He was vomiting and refusing his food. He was very flat and had sad eyes. On Friday he had emergency surgery that was scheduled to be 1 hour in theatre and 1 incision. It was far more complex than they thought; 3 hours and 5 incisions in his abdomen and stomach later and they removed the offending foreign bodies.

He has been in hospital since then. He was on a drip for medication and fluids and was refusing all food. I drove in to try to coax him to eat but nothing would brighten his mood. He is still not coping well. We just need him to be well enough to pull through.
I was due to pick him up yesterday but sadly he took another turn for the worse. He is back on IV's and still refusing food. His last meal was 6 days ago, he's lost so much weight. It is heartbreaking to see this lovely boy so unwell.

I drive in at night (once my daughter is in bed) to try to encourage him to eat and to fuss over him. We are a single income family, I am at home raising our two year old (his biggest fan) and this sudden unexpected monumental bill quite simply can't be paid.

How can you help? You can sponsor me to do a charity run on 5th August in Richmond Park.This is a BIG deal for me - I am not at all athletic! Any donation large or small will be enormously appreciated xx

I am someone who can't seem to say no to animals in need. I hope by showing my daughter how to be compassionate and caring she will in turn grow up to be a rescue mummy, just like me. The idea that some lives matter less is the root of all that is wrong with the world.