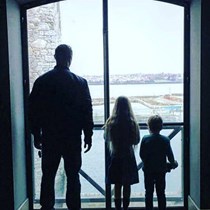 Weʼve raised £748 to Help towards the cost of CCTV to protect the Peregrine Falcons at St.Thomas church St.Annes

Following the tragic death of the female peregrine falcon (one of a pair) which occurred at St Thomas’s church in St Anne's recently, the North West Raptor Protection Group have received approval from the church to install a CCTV surveillance system over looking the car park below the perch where the dead falcon was recovered.
The local company, MD Security, providing and installing the system at St Thomas’s have agreed to part fund the project to better protect the new nesting pair at St Thomas's. Terry Pickford a founder member of the North West Raptor Protection Group, is hopeful people in the St Anne's and Lytham area who were furious when they read of the death of the first peregrine, will collectively help fund the shortfall of £300 needed to pay for the supply and installation of the surveillance system. Terry feels the equipment may be needed to help identify anyone wishing to harm the breeding peregrines at the church in the future.
Thanks to everyone who have kindly donated to my campaign to install the CCTV system at St Thomas's church to protect our nesting peregrines. As you all know we have reached the target of £300 in less than 5 days which will now fully fund the system. However, the campaign was originally set to run for 29 days, this now leaves 25 days before the campaign is terminated. I have decided therefore today to increase the original target to £800, with the additional £500 target I propose to fund the installation (at the end of 2017), of a Peregrine webcam overlooking the nesting box at the top of St Thomas's church in time for the 2018 breeding season.
The webcam will be linked via WIFI to the internet allowing people to watch the nesting peregrines at the church from their own PC's or tablets where ever they are in the world in real time. The project will also include the installation of a TV linked monitoring station in one of the church's public rooms. In cooperation with Terry Pickford it is our plan to make this educational.