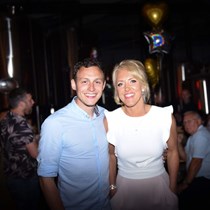 Ever wanted to be a player sponsor but never had the funds to do that alone?

Now is your chance. We're asking ALL SUPPORTERS to join us in our "Supporters' Trust Crowdfund". We can become an Official Sponsor of one of our Salford Red Devils First Team players together!!

All we ask is that you make a minimum one off contribution of at least £10. Obviously the more we raise - the more we can do for the team. Throughout the 2018 Season we will run a draw for each of the "Sponsor Benefits" open to members of our crowdfund (you will get 1 ticket in to the draw per £10 contribution you have made).

Player appearance at your event organised around team commitments

Players actual playing shirt at the end of the season

We are in negotiation with the Club and will select our player based on the success of our crowdfund.

Once you have made your donation IT IS IMPORTANT that you email us with your donation amount and all your contact details to crowdfund.salfordrlfcst@gmail.com. (If you remain anonymous we are unable to add you to the draw).

*THIS INITIATIVE IS NOT EXCLUSIVE TO SUPPORTERS' TRUST MEMBERS*