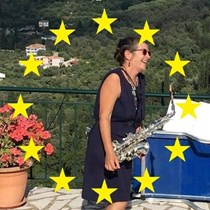 Weʼve raised £0 to (£10 per Km) to donate to local suicide prevention support agencies that I make contact with along my route.

‘I still need him to be part of my life, even though he took his own life.’

Introducing her challenge that will raise funds and awareness for suicide prevention: 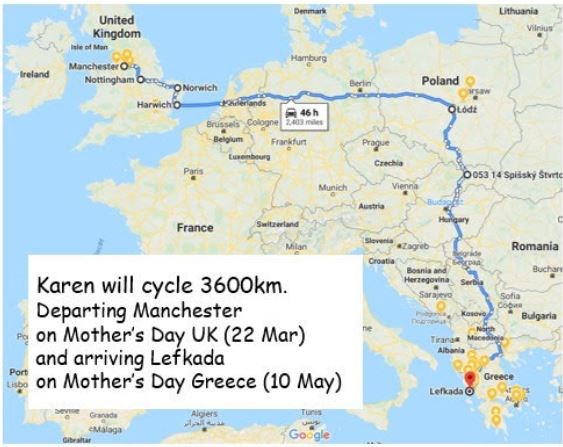 When a loved one dies, the loss is shattering. When that loved one took their own life or died through self-harming, or drugs, people just don’t know what to say.

It’s those conversations that keep memories alive and allow us to come to terms with how we can live our lives with them still with us, even if they don’t journey by our side anymore.

In September 2018 Karen was planning a cycle ride with her son from Chorlton, Manchester to her home in Lefkada, Greece. She hoped that giving him something positive to focus on in the future was a good way to help him win his fight with depression.

Now Karen is planning to do the ride by herself, on his bike in his memory, both to raise money and awareness to help prevent one of the most common causes of death for men aged 20-49 in the UK.

She is inviting women who have lost a man from their life to suicide or self-harming forms of death to ‘Talk and Ride’ to keep the conversations about those loved ones alive and to raise money for various local charities along the way including:

‘Man about a Dog’

The route will commence at the Southern Cemetery in Manchester travelling through the UK for 7 days to reach Harwich where she will ferry to the Hook of Holland and after via Lodz in Poland she will make her way south, finally arriving at her home in Lefkada, Greece.

Along the way Karen will make contact with as many people and support agencies as she can to connect and raise awareness.

In September 2018 I was planning a cycle ride with my son from, Manchester to Lefkada, hoping to give him something positive to focus on as a way to help him win his fight with depression. I am not a cyclist, but he loved it saying 'it makes me feel like I'm flying'.