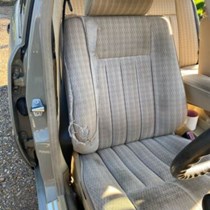 Motor Neurone Disease (MND) is a neurodegenerative condition affecting the brain and spinal cord. It’s characterised by the degeneration of primarily motor neurones leading to muscle weakness, wasting and stiffness, including problems with swallowing, communicating and breathing, which ultimately leads to death.

Around 5000 people are living with MND at any one time in the UK, however there is a 1 in 300 risk of being diagnosed with MND. Most people die within 2-3 years of developing symptoms.

Nicole’s husband David was diagnosed with MND in April 2021 and died in April this year.

Nicole says, "David was a creative, dynamic, kind and inspirational man, with a zest for life. David certainly made the most of his life, but this devastating illness cut it far too short".

Nicole, of course, was by David's side until his untimely end. David himself faced his illness with courage and dignity and the love of many friends. He is sorely missed.

The UK Govt has set aside £50 million for the charity MNDA (Motor Neurone Disease Association) BUT – has so far not actually released the funds! Although you may have heard of Motor Neurone Disease, it’s generally not well-understood. The physicist Stephen Hawking raised its profile, having suffered with it for, unusually, 55 years. More recently, the Doddie Foundation has raised both its profile and funds for MND research.

In memory of David and to actively help try to find a cure, we are driving a Motor (actually a 31-year-old beige Mercedes) in a rally through nine European countries, from Lille to Barcelona, in only four days.

Will you donate to our (literal) Motor Drive to raise awareness and much-needed funds for MND research?