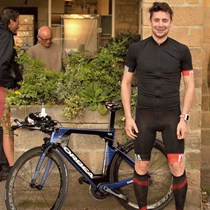 Weʼve raised £765 to Raise money to help beat cancer in memory of my Grandad Brian #TeamBrian #CureCancer FEB 2021: 28 half marathons in 28 days

Whilst watching some crazy Ultra running documentaries the other week, I was in a state of what can I do, what will push the limits of the human body. What will inspire people to help fundraise.

To cut a long story short, I sat inspired yet anything but, outside of the confines of the doc I'd watched, my partner suggested a half marathon every day for a month. So 28 half marathons in 28 days was born. The aim for 400miles.

My Grandad (Brian) had cancer and unfortunately it was terminal, he lived knowing his condition would only deteriorate. 19.11.19 would be his last day with us.

I never knew how quickly it would defeat him. 3 months after I saw him he died (I still remember him and my Nanna waiving at the doorway with a big smile on his face). I never knew he had months to live, no one said to me how quickly he would deteriorate. It's a harrowing disease , snaps life from you in the blink of an eye. He was too weak for any therapy, this would have killed him. The last photos we have of him was at the motor museum with my nanna, That is where the photo was taken.

2 months later, I got a phone call. Your Grandad can only breathe. Food and vitamins were fed through a straw, they thought he'd die over the weekend at best, but he carried on for 2 more days. I got to talk to him twice on the phone, the phone was place next to his ear, he responded by moving his eyelids, he could hear me, he wanted to talk to me, this is still incredibly hard to write even now. never knew how he'd react when I said I'd do fundraisers, he was quiet, never liked a fuss, but had to honour him for being an amazing Grandad.

He carried on until my Nanna said 'it's ok for you to go now" a hour later he stopped breathing. She misses him every day, so this is also for her as she in her own way carries on without the person she was married to for 63 years and with for 67.