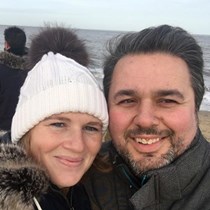 Weʼve raised £3,740 to fill Ollie’s boot to contribute to the ‘build the nest’ CSF training facility, and donate towards Addenbrooke’s Charitable Trust.

On the 11th May Ollie decided he would complete a triathlon over the course of 10 days to help raise money for the new Norwich CSF training facility being built (#buildthenest) which he will be using as part of his PDC football training. Unfortunatley, on the 13th May Ollie was diagnosed with Acute Lymphoblastic Leukaemia (ALL), which has sent our family into a whirlwind emotions, worry and a new found admiration for the staff working with young people with cancer. We‘ve also quickly become experts in all things Leukaemia, Ollie has amazed us at 8 years old with his level of understanding about what‘s happening to him, which has been encouraged and supported by the staff at Addenbrooke‘s and our local hospital. After a very intensive first 5 weeks of treatment, which left Ollie only able to crawl up the stairs and no longer able walk any distance, let alone run, he has gradually built his strength back up and is beginning to enjoy some of the physical activities he’s always loved; never going more than a few hours without kicking a ball around!

So recognising a triathlon is out of the question now (his hickman line means he can‘t swim for the time being), Ollie still wanted to raise money for the ’build the nest’ campaign, as well as giving some back to Addenbrookes Charitable Trust to help support development of the children’s cancer wards which become a ‘home from home’ for so many going through such difficult treatments. To do this, he‘s decided he wants to take on the challenge of cycling 100 miles during the summer holidays, something that previously would have been a breeze but is now much tougher with his chemo filled body. He would love to raise as much money as possible for these two charities which are both very close to Ollie‘s heart, we are so proud that he still has the passion to want to raise money for others while going through what he currently is; our little star.