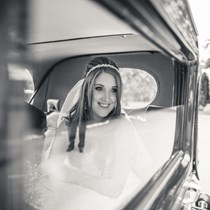 Weʼve raised £26,263 to Send my Husband Robert Howard abroad for alternative treatment for a diagnosis of a high grade Glioblastoma brain tumour

The day in September 2017 when the surgeon diagnosed my husband with Brain cancer -Glioblastoma Multiforme Stage 4 is still etched in my memory. After a brain biopsy, and the diagnosis my husband's life changed forever. Numerous doctors specialists, consultants said the prognosis wasn't good and gave him a life line of 12-18 months to live, to make many memories as we can. How can anyone break that news to a 33 year old man!

How it started : For a year Robert kept getting headaches, which looked like migrane symptoms, most times he would sleep it off get up the next morning and go to work and crack on being an electrician, but one Friday he fell ill. His co-ordination went, his face went grey and very clammy and he began to be sick. Robert could still here everything but just felt like he needed to sleep. Ambulance came and took him straight to Preston Hospital where they admitted him presuming he was having a TIA. After a CT scan they came back to us and said it showed up like an abrasion (like tissue damage). Robert finally got a bed on the neurology ward and early hours they rang me to say Robert had had a seizure, needed no medical assistance as he came round the seizure himself. From that Saturday morning onward Robert was back to himself ... eating everything in site that family and friends had bought him in and even shared with the nurses! Everyday we got promised results but we just got told '' they haven't had their MDT meeting it will definitely be today! This continued and we finally got the results on Thursday..

Results day ; We managed to get to the hospital before visiting time opened. An oncology nurse came over and said the surgeon is ready to see us .... guessing all the time we presumed it was going to be a bleed on the brain or Robert had knocked his head at work and it was tissue damage that had shown up on the scan! After Robert telling her the ins and outs of what had happend she came out with ''I'M AFRAID ITS A VERY LARGE TUMOUR, IT LOOKS LIKE IT COULD BE A HIGH GRADE, WE NEED TO OPERATE TOMORROW. The operation would take 3-4 hours and they can;t take it all out because some parts are near an artery and if they touched it, his personality may change, be incontinent or even disabled. and some other bits have started to go under the brain. They told us that Rob could go home but needed to be back to hospital before 9pm to have medication ready for the morning. So he chose to come home (even though they said take him for a drink in the pub it's not going to do any harm) he chose to have Domino's pizza with his family .. and ring his friends to tell them the news.

Operation day; Rob went down to theater at 9am, the operation took 8 hours altogether. He came back round on the ward at 6pm, sat up, drinking a cup of tea (hallucinating a lot) but I was so glad to see him. Swelling hadn't appeared but they said it would appear over the weekend which it did. They told us they had managed to take out 60% which meant when recovered he would have to go through treatment.

Robert had his 33rd birthday in hospital and on that day he was determined to get up and walk! which he did! we brought a birthday cake in ,cards, (he doesn't really remember a lot about his birthday being dosed up on medication) but we sat outside and sang Happy Birthday to him .. and Robert decided to give his birthday cake to the nurses. He was adamant he wanted to come home as he had seen a few bad experiences on the ward which no one wants to see and also the medication to relax him was making him hallucinate a lot more which then made him panic and wouldn't go to bed in the room that he was in as he kept thinking he was in there to die , but after comforting him and persuading him he finally went back into the bed. He was fighting his sleep saying if he went to sleep he was going to die, he was also scared of putting his head back on the pillow as he thought he had a massive hole at the back of his head. Tuesday came and he was allowed home. Still the same with his sleeping he didn't want to be on his own, his confidence hit rock bottom but after a lot of rest and not fighting his sleep anymore Rob was getting back to his normal self, seeing his friends which was amazing to see as he kept putting it off, but when he did the smile on his face was just lovely, he was going for walks, he even managed my sisters wedding and slipped in to see the speeches. Go Rob!!!!

Robs driving and work: Rob was self employed and was an electrician. He had his van but to be told he can no longer work or drive was another big blow. This is all Robert has ever done from the age of 16 years old. Being told all that as well as what he was going through he took it hard, who wouldn't? He loved driving his van and working

Treatment: Through many meetings, the date was set for 25th October, for 6 weeks worth of Radiotherapy and Chemotherapy (chemo tablets every day). You may here many different stories of side effects but luckily Rob has been doing just fine. Tired because of the radiotherapy so has a sleep when he can as that's the best medicine to do, hair loss/thinness has happened but he's fine with that also. He is more determined to smash these 6 weeks ready for Christmas. January the 8th we find out what the treatment has done, it may have grown, shrunk or just kept at bay. We've been told its not curable but is treatable.

I hope this story helps everyone that reads it and has an understanding of what we are going through and to why we have set up this site. Robert needs a lot of people to help him get into specialized clinic(s) abroad and get alternative treatments. Please get involved in anyway that you can!

When you get told your husband has got glioblastoma multiforme grade 4 brain tumour at the age of 33 years old ... you reach out .. organise fundraisers .. tell everyone his story ... get the word out there for #Teamrob and don’t stop till you reach the target! ❤️