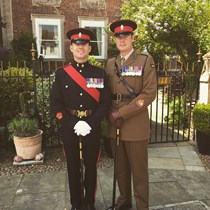 Weʼve raised £545 to The Kohima Educational Trust. £500 will put 4 children through three years of school each.

Warrant Officers Terry Clatworthy and Jon O’Neill will be running the 2021 Vitality Big Half on behalf of The Kohima Educational Trust.

The purpose of the Trust is to provide educational assistance to the young people of Nagaland India.

As the Kohima veterans of 1944 planned their final reunion, they resolved to found the Kohima Educational Trust (KET). The trust seeks to repay a debt of honour to the Naga people. The trust is seen by its founders both as a means of sustaining the memory, courage and sacrifice of those who fought and died in the battle by honouring the Nagas who were their allies in the war. The trust assists the education and development of succeeding generations of Naga children.

As the years pass the veterans of Kohima are forced to hand their vision to the next generation. As members of the Princess of Wales's Royal Regiment we see it as our responsibility to honour our forebears and pick up their mantle.

Be a good ancestor.