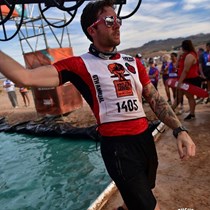 Finley was born on 21st December 2013. At just 2 days old Finley was diagnosed with GBS meningitis. Doctors worked endlessly for days to help Finley but the infection caused uncontrollable seizures which had a life changing impact. Finley suffered severe brain damage resulting in quadriplegic cerebral palsy and epilepsy along with a list of further health problems, his parents Mike and Sarah were told to expect the worst, Finley was given just a few weeks to live. After spending over 3 weeks in hospital and being away from their eldest son, they decided as parents it was time to take Finley home, love him, cherish him and make lasting memories till it was time to say goodbye. At home the weeks began to pass and he was still battling on despite many scary moments with apneas, many tears from Mum and Dad believing these would be his last moments. As time went on Finley began to show small signs of development, his vision improved and he started to show a few smiles. These small signs showed what an incredible little boy Finley is. Finley is now 3 and a half with a cheeky smile and a personality to match it. His progress is slow, with a diagnosis of cerebral palsy and epilepsy plus further complex issues, Finley is still unable to speak yet understands everything your average 3 and a half year old should and shows so much determination and spirit, he wants nothing more than to be on his feet and enjoy every part of his life. With NHS physiotherapy being limited Mike and Sarah are left with no option but to start on the costly journey of private therapy.
The aim is to help Finley reach his full potential of being able to walk without weekly physio. So far the physio has improved his strength and stability incredibly and you can follow his progress on www.facebook.com/Finleysfirstfootsteps

On September the 15th-17th myself and 2 others are running 187 miles along the river Thames from it's source in Kemble to the Thames flood barrier. I will be raising money to help support Mike and Sarah so that they can continue with the physiotherapy needed for their son