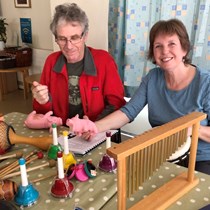 Helen, Sarah and Ted are raising money for an important team who play a significant role in helping neurological patients, using the medium of music. Sadly, due to COVID-19, their funding has ceased and are currently unable to support patients.

At the end of 2019, Louis ‘Ted’ Espir was diagnosed with the rare neurological condition Guillain-Barré syndrome (GBS) which resulted in sudden paralysis and loss of strength in his muscles. After hospitalisation, Ted became an in-patient at the Somerset Neurological Rehabilitation Centre for his recovery during 2020.

As part of Ted's intensive rehabilitation programme a team of Music Therapists helped him regain skills and functional movement as well as supporting his emotional well-being.

The two professional Music Therapists Sue and Ali who ran this valuable therapy have now lost their sponsorship and are therefore unable to continue to help other patients.

Ted is a retired airline pilot and during his career travelled to many distant lands. As a pilot he endeavoured to ensure that none of his passengers wanted to jump out of his aircraft, but ironically jumping out of an aircraft (in the form of a skydive) has always been a dream of his and he had planned to jump with his daughter before he became ill!

Sadly at present he is physically unable to complete the Skydive so he has asked Helen to jump alongside his daughter Sarah, with the aim of raising funds so that music therapy can continue to be offered to other patients.

Helen and Ted met in Dene Barton where Helen worked as a Health Care Assistant. Her role was to assist with his nursing needs and to empower him to regain functional skills. Helen still works within rehabilitation however now works as a member of the Integrated Rehabilitation Team in Minehead hospital. Ted continues to recover from his illness at home with his lovely wife and remains an inspiration to all who know him. He looks forward to completing a skydive in the future.

'Music therapy is an established psychological clinical intervention, which is delivered by HCPC registered music therapists to help people whose lives have been affected by injury, illness or disability through supporting their psychological, emotional, cognitive, physical, communicative and social needs.' British Association for Music Therapy

All funds raised will go to the Music Therapy Team.