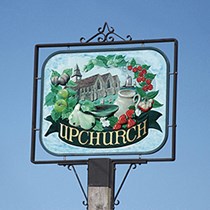 Weʼve raised £1,133 to modernise the Church Clock at Saint Mary the Virgin, Upchurch

We have modernised the clock at Saint Mary the Virgin, Upchurch - now if you wish, you can help...

Pictured above: State of the art changes make clock fit for the 21st century.

Upchurch Parish Council, who look after the clock, (which is a war memorial) on behalf of the residents of the Parish, have used Parish funds to upgrade and modernise the clock and winding mechanisms in the tower of Saint Mary the Virgin, Upchurch, to mark the centenary of the end of the Great War.

Local residents and visitors to the village have expressed their desire to make a contribution to the work as a way of saying 'thank you' for the sacrifice of those in the First World War, in the same way it was originally funded. The Parish Council are providing this crowd funding opportunity to those who wish to make a personal and lasting act of Remembrance in helping preserve our War Memorial for future generations of villagers and visitors to enjoy.

The Church Tower and Spire

The church of Saint Mary the Virgin, Upchurch has stood as the focus of the village for the past 900 years. The dominant feature which breaks the skyline and can be seen for miles is the six-sided, oak-shingled “candle-snuffer” spire.

The Tower beneath the spire is constructed of split flints. The upper part was constructed in the 16th century and re-designed late in the 19th century. There are six bells in the tower, which are still rung regularly and 5 of which sound the chimes and strike of the clock.

100 Years of the Church Clock

On June the 3rd 1919 a village referendum took place in which villagers voted for their preferred war memorial to remember all those who lost their life during the First World War. A clock for the church tower won the vote and was installed in the church on Christmas Day 1920.

The church clock was made by Gillett & Johnston, Croydon. Clockmakers & Bellfounders to H.M. King George V. The clock has three faces, on the north, south and west sides of the tower. A plaque outside the south door reads: “The Clock and Chimes were erected by the people of Upchurch as a Thanksgiving for Victory and Peace Christmas 1918”.

National commemorations to mark the centenary of the end of the First World War will take place this throughout this year. The highlight will be a national event taking place on November 11th named ‘A Nation’s Tribute - Battle’s Over’, which Upchurch will mark with the construction and lighting of a village beacon and accompany with the peeling of our church bells.

Upchurch Parish Council, (who look after the war memorial on behalf of the residents of the Parish), have decided that the centenary of the end of the Great War is the perfect opportunity to upgrade, modernise and preserve our clock for future generations of villagers to enjoy. This will complete the works started in 2011 when the 3 clock faces were refurbished as part of the project to renovate the church tower.

The Modernisation of the Church Clock

The regular peel of the Westminster Chimes and the distinctive strike each hour have been a constant in villagers lives for 100 years, and are sorely missed when the clock stops, something that has been happening more and more frequently in recent months.

The clock is a mechanical marvel, and is in outstanding condition, easily set to do another century or two. The clock is designed to strike each hour including overnight whilst the chimes sound throughout the day from 7:15am until 11:00pm. Interestingly the clock runs at different speeds throughout the year because the parts expand and contract with the seasons, the small variations have been managed (until now) by lengthening and shortening the pendulum once or twice a month.

The original clock mechanism was driven by falling weights, which had to be wound up to the top of the tower by hand twice a week. This system was replaced (probably in the 1970’s) by a set of three electric motors which drive the clock, the strike and the chimes, sadly this winding system has come to the end of its life and needs modernisation.

Upchurch Parish Council have commissioned Clockwise Restorations to complete the modernisation which includes innovations to continually monitor and adjust the clock’s timekeeping and make the changes for daylight saving in the Spring and Autumn and last but by no means least keep the clock working through a power cut, which we know are all too frequent in the village.

The total cost of this exciting project is just over £8500

Fundraising - The Hands of Time

The village clock was provided by the residents of the village 100 years ago as a War Memorial to those who lost their lives defending our freedom and the Parish Council wish to offer the residents today the opportunity to show their thanks and appreciation by taking part in the restoration project in a personal way. Residents are invited to ‘buy time’ on the clock face, our target is to raise an hour, or put another way 3600 seconds, to say thank you!

Please donate what you can, to reach our target, we would like each second on the face to sell for £2.35, (less than a cup of coffee), we hope you will agree this is a lovely and lasting way to personally say thank you from our generation, to those in an earlier generation who sacrificed their lives for our freedom.

Upchurch Parish Council, (who look after the war memorial on behalf of the residents of the Parish), have decided that the centenary of the end of the Great War is the perfect opportunity to upgrade, modernise and preserve our clock for future generations of villagers to enjoy.