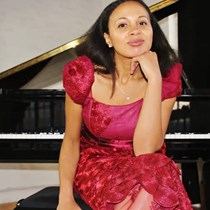 World’s first ever African Concert Series was founded in London in 2019 and featured 10 monthly concerts of music by African classical composers. Described by the BBC World Service as “the African Art Music makes a comeback”, the programme of the series reflected the depth and diversity of African Art Music - the richly diverse genre of music which forms a bridge between Western classical music and African traditional music.

"Bringing African classical music to the Western audience was right from the start an endeavour meant to unravel the cultural diversity of the African continent, reflected in its music, and to create a platform for the African classical music to be performed. Africa is very colourful - each country in Africa has a multitude of ethnic groups and each ethnic group has a music of its own, with characteristic melodies and rhythms -, quality which I have tried to emphasise in the programmes of The African Concert Series, through individually themed concerts: Nigerian Odyssey, The South African Double Bass, String Quartets by African Composers, Arabesque: Piano music from North Africa and the Arab world, and many more. Each artist that performs in the series is a pioneer of his own land. Knowing your roots, your heritage and culture, helps you know who you are - and it's powerful! Africa must write its own history and this is what we are doing at The African Concert Series London!" (Rebeca Omordia, founder)

- The African Concert Series London fosters education across cultures, it is a place where everyone, adults and children, can learn about the African culture through its music

- Rebeca Omordia discusses on BBC World Service about the effect the Colonialism has had on the African culture and the importance of exploring and preserving the Cultural Heritage.

- Rebeca discusses on BBC World News TV (see interview below) the impact the series has had on a cultural level during difficult social and racial times and its position regarding the Black Lives Matter Movement - a message of love and inclusion.

While the 2019 series was self-funded and Rebeca Omordia took a £10.000 personal loan to finish the 2019 series, the 2020 series was possible due to the support of the artists involved, The African Concert Series London needs help in order to continue its pioneering work in 2021.

Overview of the 2019 African Concert Series.