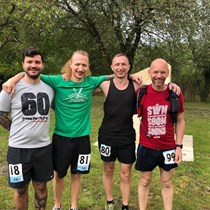 Weʼve raised £12,612 to fight back against the persecution of Hen Harriers

Hi, I’m Henry, and in the first week of July I am going to wear a trackable tag and run 200km from Lancashire to Yorkshire, visiting every last known site a hen harrier transmitter has stopped working in the last ten years.

The available science tells us that England should be able to sustain over 300 pairs of breeding Hen Harriers but illegal killing has instead driven these raptors to the edge of extinction. A recent peer reviewed study tells us that at least 72% of tagged hen harriers were either confirmed or considered very likely to have been illegally killed above grouse moors, and in 2018 there were only 9 successful breeding attempts.

There is precious little publicity about this national scandal , whilst combating these crimes is extremely difficult because they occur in remote areas. We want to help change that by raising money for wildlife crime campaigners Wild Justice and offering reward money to anyone with information that leads to the prosecution of the people involved in these pitiful crimes.

'If I go in to an art gallery and I slash a John Constable painting, I’ve committed a criminal act and I would be pilloried for that around the world; I’d damaged a national treasure, in fact a global treasure. If a gamekeeper shoots a golden eagle on a grouse moor in Scotland, from my perspective that’s damaging our natural heritage, that’s as much a crime as me slashing a painting, it’s robbing us of our ability to enjoy an aspect of our environment and in the case of the eagle, one which is playing a critical ecological role.'

I am an ultra marathon runner, festival promoter and personal trainer. I have run over 40 ultra marathons in fantastic locations all over the UK, but I've yet to see a hen harrier. I want to change this!