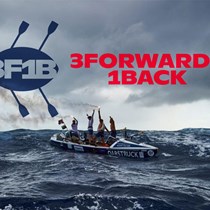 Weʼve raised £3,970 to Build a much needed school in the Himalayas by becoming the first recorded crew to ever row across the Arctic Ocean.

The Polar Row will be a world first , and the most record-breaking manpower team in history.

The expedition aims to become the first ever recorded crew to row across the Arctic Ocean from Norway to Svalbard, and then onto Iceland.

The crew comprises of six multinational athletes, including a double Gold medal Olympian, a Doctor, and Ocean rowing pioneers.

The crew have already rowed from Tromso to Svalbard, and in doing so became:

- The FASTEST rowers in Arctic waters.

- The FIRST South to North Arctic crossing ever rowed.

- The MOST Northerly latitude reached by rowing.

The crew have now left Svalbard and are rowing North, aiming to increase the record for the most Northerly row. They will then turn South and head for Iceland. When exactly they turn south will most probably be dictated by the location of sea ice. Unpredictable winds and cold make this row an extreme challenge.

If successful the crew will have:

- Beaten their own Northernmost latitude record.

- Completed the LONGEST Arctic row EVER.

- Be the FIRST crew to row across the Greenland sea.

You can find out more about The Polar Row here:

Alongside exploration and performing research into human endurance and adaptation, the expedition aims to raise funds to build a brand new Primart school in the Himalayas. This project will begin in January of 2018 and will be the second school built under the Fiann Paul Foundation.

This is a part of the world in which many children are deprived of quality education, and it is our hope that the children who will attend our school will benefit from opportunities they would not otherwise have enjoyed.

We thank you in advance for your kind donation and ask you to spread the word about the Polar Row!

Our pioneering Polar Row expedition across the Arctic Ocean will create new ocean rowing records & raise charitable funds for the development of a school in the Himalayas. We are a team of International rowers from USA/UK/Iceland/Norway/India. Website: www.polarrow.com