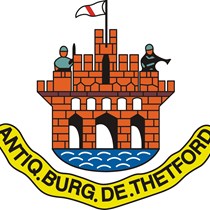 Weʼre raising £300 to Carve Pumpkins for The Mayor's Charities. Reach the target, and we'll dump all the Pumpkin guts on The Mayor LIVE ON STREAM!

It's October, which means its now time to get s p o o k y! 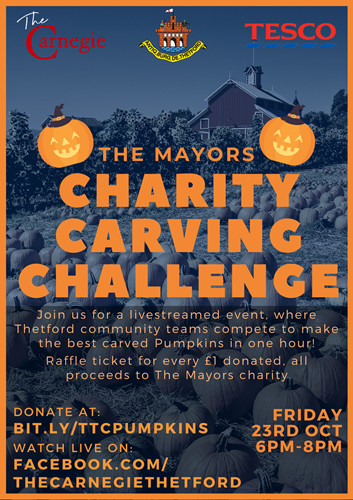 As the weather gets colder and the darkness draws in earlier, it's time to get sucked into the festivities of Halloween. And what better way to do this than by carving pumpkins!

At 6pm on Friday 23rd October, 6 teams of 3 will compete with each other to create the best pumpkins they can with an hour time limit, and they will be judged by the Mayor Cllr. Mark Robinson and the Carnegie events team.

But why donate to this, you ask? Well, for every £100 raised, youll get the deep, satisfying joy of seeing the Mayor handle a forfeit to be on the receiving end of. At £100, he'll be facing water sponges thrown by the guests, at £200 he'll get a custard pie to the face, and at £300...all of the pumpkin guts that were removed during the event? Yep, that will all end up on his head. We all want to see that, so lets get to the £300 target goal!

We will also have a raffle taking place during the event, where every £1 donated will earn you a ticket, make sure you leave a name and email when you donate, so we can contact you if you win!

This is the official JustGiving account for Thetford Town Council. During these difficult times, many events & groups have been forced to operate online, and that includes us. By using JustGiving, we will continue to support the Mayor's charities with a variety of online events!