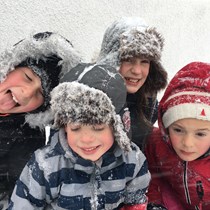 Weʼve raised £2,235 to help our friends rebuild and refurnish their 4 children's bedrooms after they were destroyed in a house fire last year.

Our friends, Paul and Sophie Weldin, lost just about everything when their home was destroyed in a house fire last year. They were away on holiday when it happened as an electrical fault on an outside light caused a spark, which caught the whole roof alight. They were lucky to be away as it could have been fatal.

The insurers are refusing to pay up ( Daily Mail 28th March 18) and despite pulling together all the money they can, they can only afford to rebuild part of the house.

We would like to raise enough to rebuild, decorate and furnish the 4 childrens bedrooms. Daisy, Woody, Albie and Dexter lost all of their toys and special things in the blaze and we would really like to be able to make something good come out of this for them. They have all been so brave and we'd love to be able to give them the rooms they dreamed off.

At the moment the house is damp throughout as the rain has been coming in for months. There is smoke and fire damage everywhere and the roof has had to come completely off as well as all the plaster. The kids rooms are just brick shells and have no ceilings as they fell in. Paul and Sophie are going to put on the new roof and windows and then hopefully have enough for a kitchen area, a bathroom and a bedroom but it will definitely be a squash for them with 6 mattresses on the floor.

We want to make sure there is enough money to make the children bedrooms nice. We'd like to rebuild them, furnish them and buy them beds and maybe replace some of the toys they lost.

Any little bit you can give would help make this horrible experience better for the kids and show them that the community around them care.