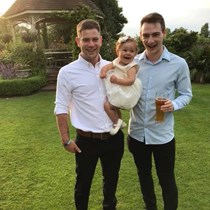 Myself and a team of serving soldiers will be taking on the National three peaks challenge to raise money and awareness for a charity called Headway. We will be completing this challenge within 24 hours and it will not be easy.

Why this charity? Well it all started with my little brother, Ryan, who became ill at the start of May 2019. As it turned out he wasn't just a little bit ill, he had a condition called MoyaMoya. This condition meant that the carotid artery in Ryan's brain was closing and he ended up having three strokes, TIA's (transient ischaemic attack), two cardiac arrests, a pacemaker fitted and as a result was in Aberystwyth, Cardiff, Swansea and finally Bristol hospital for over three months. I know, he's so dramatic, right!

As a result of his treatment my family were stuck with the costs of travel, food and accommodation all whilst living in West Wales. In order to visit Ryan daily in Bristol hospital the costs would amount to something mad (thousands of pounds). This is where JustGiving and Headway stepped in and between them covered the majority of the cost to facilitate this.

Not only did they contribute to the financial situation but also put Ryan in touch with other people who were going through similar ordeals, which as you can imagine helped Ryan in a way that friends and family could not.

You can help other people in the same situation like my brother. Not only to help with things such as expenses and support but also make people more aware of this rare brain conditions.

We will be completing this fundraising event mid August 2020 taking on the 23miles of mountains all within 24hours. depending on the availability of the national parks in Scotland and Wales.

A small contribution will not only move mountains but continue the work of this incredible charity, so that they can help others just like Ryan. This money raised will help us complete this difficult challenge and be a heathy contribution to others suffering in the same way.