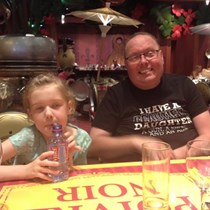 Weʼve raised £335 to help Tim getting a handbike system to stay healthy, both physically and emotionally

I was diagnosed with Von Hippel Lindau (VHL) Disease at the age of 21 in 1997, just before my final exams at UEA. As I was adopted, and the condition being hereditary, I was not pre-warned at all. On the plus side, nobody else in my family has to put up with this condition.
I have had 14 general anaesthetics since then as follows:
1997 - retinal cryotherapy leading to blindness in left eye since.
2003 - spinal laminectomy
2005 - 30% of left kidney removed due to cancer.
2010 to 2014 - 9 brain surgeries to remove 9 tumours and cysts, developed hydrocephalus so had shunt fitted but developed hospital acquired meningitis. Shunt removed, 3 weeks of external antibiotics, then shunt resited to other side.
April 2014 - 5 weeks of daily radiotherapy to stop further growth of 2 remaining brain tumours.
Jan 2015 - spinal surgery to remove 3 intra medullary tumours plus removal of lamina. Resulted in sensory paralysis below waist and down left side. Have been confined to a wheelchair since.
In the past few months I have discovered Just Ride at Garrons Park, Southend. Here I have gained access to a hand propelled bike and the athletics track. I never thought I would be able to enjoy the freedom of cycling or get some meaningful exercise. It really has been a life changer and helps me remain independent.
Through contact with Just Ride, I have discovered that there is a fantastic handbike system, an RGK wheelchair and an Atitude hybrid cycle system, that I could not only use for exercise, but it could potentially open up the roads to me, and also help with my general fitness.
I also found out, unfortunately, that the whole system would cost up to £6000, a pretty impressive figure. Being unable to work following this injury, we are trying other ways to raise funds. Whilst I hope some of you will be able to join us at Garrons Park athletics track , I have set up this crowdfunding page for those who can't make or simply want to donate. please sponsor me!!!

I have this horrific genetic condition VHL, which causes benign and malignant tumours to grow in blood rich areas, namely the retinas, the brain, the spine, the kidneys, the pancreas and the adrenal glands. I am looking to get a handbike to remain independent and healthy.