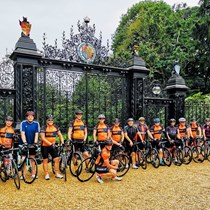 Exciting cycling prospect Tim James who was tipped to compete alongside the world’s elite has died from a rare cancer aged just 23. Tim became ill last year, on the cusp of joining the professional ranks, with what was ultimately diagnosed as an extremely rare cancer.

A fierce competitor on the bike, with a compassionate nature out of the saddle, he took on three rounds of chemotherapy and surgery. Against a disease of which less than a handful of cases had ever been recorded in the world, Tim faced an unfair fight, but handled it with positivity.

All money raised will be split between Cancer Charities chosen by Tim's Family.