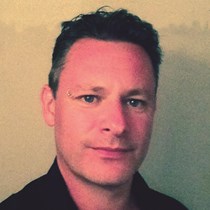 Weʼve raised £1,870 to I have been nominated for an Eisner Award for the first time and would love to attend the San Diego Comic Con to pick up the award in person

Ever since I was a kid I've had two dreams. The first was that I'd always wanted to visit the "Mecca" of comic books, San Diego Comic Con (SDCC) . However, it was always beyond my finances. Eventually, I was lucky enough to go there on business in 2007. But in the intervening 11 years I've never been able to afford to return, nor had a definitive reason to.

My second dream was to win an Eisner Award. After 17 years of writing over 15 books on comics—and editing and contributing to countless others—I finally came in sight of my second dream when my latest book—How Comics Work , co-written with Dave Gibbons (of Watchmen fame)—was nominated for Best Comics-Related Book in this year's Eisner Awards .

Not only that, but another book I co-edited, Humanoids ' Deconstructing The Incal, has also been nominated in the same category! Now I have TWO of the most important reasons ever to go to SDCC! The Eisner's are comics equivalent to The Oscar's, and are the most prestigious English language comic book awards!

My co-author, Dave Gibbons, is also up for potentially being inducted into the Eisner Hall of Fame, and it would be wonderful to share that moment with him as well.

Unfortunately the cost of visiting SDCC is incredibly expensive! I was genuinely shocked when I saw how much flights and hotels are! Seeing as this maybe my only chance to receive an Eisner Award I would love to fulfill my childhood dream of picking up the award in person. Your contribution will go towards covering a return flight and accommodation and that's it. I will cover everything else myself.

So think of this as a fundraiser for a small indy film company trying to get to the Oscar's and will wave the flag loudly and proudly for Great Britain as the home of exceptional creative talent in the comic industry. And to help make a dream come true!

Whatever you can give will be gratefully received, even if it's £1! If I don't reach the target, but get near, I will hopefully make up the difference. However, if the campaign falls well short I will return everyone's money.

I will keep all backers updated with reports and Facebook Live videos from the Convention and the actual Eisner's ceremony (permissions withstanding).

Tim was an assistant editor for Vertigo Comics, associate editor at Comics International and the head of Humanoids UK. He’s the author of over 20 books, the latest being How Comics Work, with Dave Gibbons. www.sexdrugsandcomicbooks.blogspot.com Twitter: Tim_Pilcher.