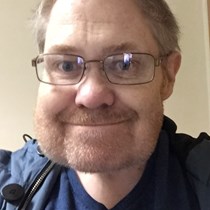 Weʼve raised £16,143 to help Tommy support his family while he battles cancer - for the second time!

Hello! I'm Tommy Donbavand, an author in the UK. I've written over 100 books, primarily for children, including many adventures especially for dyslexic, struggling and reluctant readers.

On Thursday, 10th of March 2016, I returned home from a hospital appointment and broke the news to my wife and children. I had throat cancer. Stage four. Inoperable.

Over the following months, I underwent intensive courses of both radiotherapy and chemotherapy in an attempt to eradicate this evil disease.

Everything seemed to go well until, shortly after my treatment ended, I contracted double pneumonia and sepsis and was rushed into Intensive Care where my family was informed that, unless I started responding to treatment, I had approximately two hours left to live.

Thankfully, I fought my way back from the light (and there WAS light) and slowly began to recuperate, eventually leaving hospital just over a month later.

Since then, I've spent every single day battling my way back to health so I could return to work and provide for my wife, Kirsty, and two sons - Arran and Sam. It wasn't easy. I was now also suffering from, and having treatment for, lymphedema, trismus (lockjaw), and severe depression.

I couldn't eat or speak properly any longer. In just over a year, I lost 13 stones (182 pounds - I was very overweight when first diagnosed) and had become so weak I was given a hospital bed to sleep in the living room as I could no longer manage the stairs at home. I looked so bad that the first time I saw myself in a full-length mirror, I collapsed in tears.

I resembled a badly wrapped skeleton!

Still, I worked hard on my recovery, and was declared to be in remission in mid-2017. I'd done it! I'd survived.

Then, just before Christmas 2017, I underwent a CT scan to examine a lump in my jaw. I got the results on 16th January 2018. The lump was nothing to worry about; most likely a resurgence of my existing lymphedema problems.

However, my oncologist said there was something else we had to discuss, and it wasn't good news.

The CT scan had discovered a tumour growing in my left lung. A tumour that hadn't been there before.

It's back for round two.

I've been referred to a chest cancer specialist and, at the time of writing this, I'm waiting for an appointment. He's likely to take a biopsy to find out exactly what we're dealing with, then its back to treatment again. That could be surgery, more radiotherapy, more chemotherapy - or all three.

You may not be aware that, unless you're one of the big name, celebrity authors, you can struggle to make a living and pay your bills by writing alone. Like many other children's authors, most of my income came from visiting schools to teach creative writing, talk about my work, and inspire a love of reading.

That part of my career was destroyed by throat cancer and now, as I was fighting hard to get back to work, the cancer has returned to stomp all over me again.

I can still write, but nowhere near as much or for as long as I used to be able to. After falling ill, I was forced to pull out of several projects, and missed deadlines on those I attempted to stick with. Some of my books were taken from me and given to other authors to write. I understood why - publishers have targets to meet and, if I can't do the work I'm supposed to, they have to find someone else who can.

All this has left me struggling to support my family. I now receive disability benefit, but don't qualify for help with rent or council tax because the carer's allowance my wife gets for looking after me full-time puts us around three or four pounds over the threshold. I'm writing as quickly as I can, but that's about to be scuppered due to heading back into treatment.

I kept a blog about my first battle with cancer in an effort to understand what I was going through. I later turned that blog into a self-published book called 'Tommy V Cancer'. My hope is that it might prove helpful to anyone who suddenly finds themselves or a loved one facing cancer, and doesn't know what to expect.

You can find out more about the book here...

I've decided to relaunch the blog to chart my progress through this new fight with the disease. If you're interested, check it out here: http://www.tommyvcancer.com

I've received several messages from friends and well-wishers suggesting I start a campaign here on Just Giving. I really wasn't sure that I should (I'm still not). I've always worked hard to support my family, and I hate the idea of holding out my hand and asking for charity. But now, the cancer has returned for another crack at me and I don't want my family to suffer because I'm flat on my back, fighting an evil disease.

My name is Tommy Donbavand, and I'm the author of over 100 children's books. Currently battling cancer - for the second time.