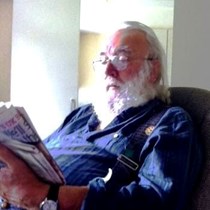 Weʼve raised £14,405 to help Dick Gaughan, who has given so much to the folk scene over the years, get over a health problem.

It has been observed that Dick Gaughan's performances in recent months haven't been "full-strength Dick Gaughan".

Dick has now stated publicly at two recent gigs that, "In order to prevent rumours spreading, I think I have had a stroke".
It is untrue to say that he cannot sing or play guitar.
However in saying what he has said, Dick is acknowledging that 'something', as yet unconfirmed, is not right.

Dick has an appointment with a neurologist in early October 2016 when the situation will, it is hoped, be clarified.
Until then "I think I have had stroke" is not an opinion based on medical fact.

Dick is resting after October.

All moneys received in this fund will be transferred to Dick after one month.

We wish him well.