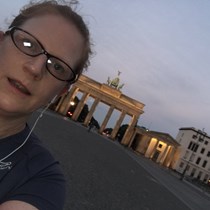 Fiona Oakes cares for around 400 rescued animals, including 112 pigs & 76 horses. This is not what Fiona does for a living, she takes no income nor expenses from any donations. All money donated goes straight to her animals. Fiona also works as a retained fire-fighter & elite marathon runner and her partner worked for a Bank.

Fiona Oakes has made a name for herself as an endurance runner apart from the rest. She is the fastest woman in the world to run a marathon on all seven continents and the north pole in both cumulative and elapsed time. She has competed internationally in more than 50 marathons and set 5 marathon course records around the globe, including The Antarctic Ice Marathon. She has successfully completed the “toughest footrace on earth' the Marathon Des Sables, 250km race through the Sahara Desert numerous times.

Fiona operates, almost single handedly, an animal sanctuary, caring for nearly 400 formerly abused and neglected animals, all while training more than 100 miles a week in running. She needs to raise £12k a month to cover outgoings.

Between marathon running and the sanctuary Fiona puts every last bit of her energy into raising awareness for animal cruelty and showing the world that veganism is not only a compassionate way to live but a healthy way which can fuel you to achieve amazing athletic performance beyond your wildest dreams.

Vegan Runners UK will run at the Stockport 10k on 16 September 2018 and last year, 160 of us participated, claiming first and second place in both female and male categories and team Win.

We would collectively like to raise funds for Fiona’s sanctuary and would be grateful for any donation.

Please support us, wherever in the world you are.

On behalf of Vegan Runners UK we would be grateful for any donation, big and small, to support Fiona Oakes and her partner, Martin supporting all their animals. Thank you!