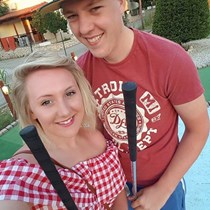 Weʼve raised £145 to help fund the town production of 'Underneath the Arches' to celebrate the 60th anniversary of the Plowright Theatre in Scunthorpe.

Next year is the 60th anniversary of the Plowright Theatre in Scunthorpe. To celebrate this the Scunthorpe Drama Federation are hosting a town production of Underneath the Arches, the story of The Crazy Gang. The production is to be directed by Darren Johnson (Annie Fanny), who has agreed to take this on free of charge, which is a huge bonus and the Drama Federation are very grateful to Darren for this commitment. Darren is very excited about the project as it is a show very close to his heart.

The Scunthorpe Drama Federation is an organisation made up of members of the local amateur groups who work together to liaise between the Theatre and the groups. The Drama Federation was formed in the 1950’s and was instrumental in getting the theatre, then named ‘The Civic Theatre’ built.

The Drama Federation itself does not have any funding available and each group requires their own funds to continue with their own productions, so we are looking at any donations to enable us to fund the project.

The project could potentially involve up to about seventy people including technicians, dancers, musicians and performers, as well as all the admin. Previous town productions have been very successful and they are a great way of bringing the local community together. There will be open auditions for both adults and children.

Costs involved in putting on productions can soon add up. We are hoping to keep spending to a minimum by utilising the existing resources of each group involved. However certain costs are inevitable, such as licencing, royalties, theatre hire, advertising materials, some items of costume and scenery etc.

We are hoping to sell plenty of tickets to fund the project but need funding to get it off the ground, for example, we have already had to pay £500 to secure the performing licence.

If you feel able to support this project in any way no matter how small we would be very grateful.