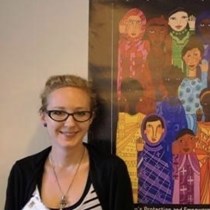 Thank you all for your continued support, generosity, love, messages and solidarity, it is making a huge difference.

Up to this date, we have raised £25,899! Breakdown of this total: £16,591 raised here so far, £2,000 from previous donations, and we also received a donation of $10,000 from the organisation, SumOfUs (https://www.sumofus.org/), who raised this donation through their networks, supporters and communities.

Of this amount, we have so far transferred £17,170 to 41 women who have extended this support to their families, their fellow activists, teams, and the communities they support. We are currently planning for further wire transfers to our growing list of new recipients, including four recipients due to be wired money immanently.

The latest round of wire transfers have supported a diverse range of activists from all over Ukraine. To share with you a few of those: One has just reconnected with us, after 18 days of silence, to let us know that she and her family survived the assault on Mariupol and made it out of there. She is now using money we transferred to organize the evacuations of more people from there. In Kharkiv, another large city facing massive destruction, two LGBT activists are rallying support for their own community as well as vulnerable elderly in their neighborhoods. In Ukraine's southwest, still far from large-scale military action, a community activist in Uzhgorod has started providing support for displaced people streaming into her city. We were also able to support 8 young feminist activists who used to work on art projects, social entrepreneurship and LGBT rights, but have become refugees and are redirecting their efforts to humanitarian and refugee support.

We received this message from one woman who received money, donated by you all, and she wanted us to share it with you:

“Yes I have got money and I still can't believe it. It's so fantastic that unknown people could be so sympathetic and kind to somebody's destiny! I am happy and I am crying because of this accident.

Thank you so much because it is such an awful feeling for me - watching how my business has almost stopped and you can't earn money because of war and still need to pay rent, bills. buy food, and try to survive, to support your relatives... Thank you. I am so surprised by this help and it is so important for me now!!! If you can say to people who donate please say that I will never forget this help and their kindness and their support! And I appreciate them so much! They are unbelievable people! May God return their kindness a hundredfold!”

We will continue to share updates on here in the coming days.

With love and solidarity,

The continued support, love and solidarity being received for the women, their activism, their teams, fellow activists, and their families, and the communities they support, has been immense. It is making an enormous difference and each day and week we see and hear just what a lifeline your support as been to them. We are deeply grateful. Thank you all.

Further to our update below, of the money raised so far, we have disbursed some £8,400 to date. All transfers (usually £400, or more in case of special needs) except four have gone to activists who are still located in Ukraine, some of whom are unable to flee because their cities are under siege and no humanitarian corridors are available, with some remaining in their cities on purpose because they feel they can still help and support others in their community and city. Some of the recipients are in cities you have read about on the news, such as Mariupol and Kharkiv, some are in cities occupied by the Russian army, unable to leave.

Among those who have received money donations so far, are - I. , who was displaced from her native village on the Black Sea by heavy fighting 7 years ago and tirelessly worked together with her neighbours to be allowed back, to bring the community back together and back to their homes safely. Y., who has been tirelessly and devotedly collecting and distributing food, clothing and medicines for displaced people and those living in dire poverty. And A., a young feminist activist from Western Ukraine, who needed to flee for her life, who has now been able to make it across the border and is now in a safe country. No full names, their cities and specific details are included, to protect the safety and privacy of activists who received funding.

Other activists receiving your donations including those who have long been working on wide range of urgent issues and needs in their communities, including working on domestic violence, supporting vulnerable elderly, mental health, and food distributions, and with many also working more specifically on women's rights and addressing different forms violence against women and girls.

We have plans to distribute a further £2,400 imminently to a further 6 recipients and those in their families and communities they are supporting. We continue to plan for the rest of the money raised and being raised to ensure women are getting this urgent support as quick as possible.

More updates from us very soon.

So far we have raised £11,498 - £9,498 here plus the previous amount raised of £2,000! Thanks so much from our hearts to those who have donated so far. The support and solidarity is immense and means the world. With this money raised, we have so far sent out £4,600 from your donations to at least 17 women human rights defenders (WHRD) and activists from across the frontlines. They are using this money for the survival of themselves, their families, children and also for those who most need it in their communities - those they have long been supporting in their activism and rights work. Specifically, this money is going towards:

- Critical transportation and evacuations (where possible and safe) for them, their families and teams to get out from areas where fighting takes place;

- they are also buying food and basic necessities, including baby food/formula, and urgent medicines for themselves, their families and their teams;

- they are also distributing it to the vulnerable people they tirelessly support in their communities (such as the elderly, those unable to leave the house including those with disabilities, those with debilitating illnesses, and families with young children).

A further £2,250 is going to be sent out through our networks imminently, while we work to plan for the distribution of the remaining amount raised to date.

At this point, active fighting has taken or is taking place in cities in Ukraine’s south and east as well as the capital Kyiv. Some have been captured by the Russian army, some are still subjected to shelling, missile strikes etc. Some smaller cities have had their exits blocked for days now, which means residents have to shelter in basements and cannot move around safely. All over this part of the country, food and other supplies are running low, as is cash. Prices have gone up, especially for things like baby formula or fuel. No humanitarian corridors have been agreed. Large humanitarian organizations are unable to access many of these locations.

As one recipient of our support, an activist from a small town right next to the old frontline, told us today: “When things got hot here, international aid groups left, they left us to drown here. But we did what we have been doing since 2014. We're a group women who have no work, in a city where there is no food. We try to collect what we can and share it."

We have already raised around £2,000 which has already been sent and received by women in Ukraine and urgently need support to raise more. Our target is £5,000 and if we can raise more, even better. All money raised goes directly to women and their children/families.

Using quick and cheap international wires (tested these past weeks and working reliably) to trusted activists we have worked with for years, we can help them survive, stay safe protect their teams and the communities they work with.

Women across Ukraine are huddling in basements, sleeping in subway stations or traveling on arduous journeys to reach safety, while missiles are raining down on their cities and tanks rolling through their streets. They need our help to stay safe and alive, to keep their families safe and alive.

We have worked with grass-roots women activists in Ukraine since the war there started in 2014. We watched in awe over the years as they were holding their communities together and preventing an expansion of war, protecting people affected by conflict or any other forms of violence, reviving education and the arts against huge odds, sustaining the vulnerable in conditions of gruelling poverty, extending ties across frontlines to eventually reclaim peace. All over this large country, women activists have built communities and networks of mutual support and activism. Now they are trying to protect and support each other, hide together, flee together, leave no one behind.

They have long known that a greater war was always possible, and they had courageous, creative ideas on how to prevent that and build true peace. But they were never listened to and even threatened when they spoke of peace instead of glorious victory.

Ukraine is Europe’s poorest country, with half the population living on less than $120 a month. Ukrainians have no reserves to draw on except their courage and resilience. They are depleted from stress, heartache, fear and worry, never mind the COVID pandemic.

Many of them have been unable to leave their hometowns, because they simply cannot pay for transportation, let alone basic costs upon arrival somewhere safe. This is why we are raising funds for them.

We are: Almut Rochowanski has been supporting activists in the former Soviet Union on their advocacy, security and financing for 20 years. In Ukraine, she worked for WILPF (https://www.wilpf.org/) and Kvinna Till Kvinna (https://kvinnatillkvinna.org/) from 2015-17, mapping grass-roots women's activism across the country and their emerging networks, with whom she has stayed in touch since then.

Amy Greenbank, a UK-based activist with over 13 years’ direct experience working on women’s human rights, addressing violence against women and girls, and on women’s security. She has extensive experience working on individual activist and defender security providing tailored emergency support when they are under threat such as helping them access emergency grants, urgent health care, logistics, safety planning, and re-location. She has worked across international humanitarian organisations (such as International Rescue Committee, Saferworld, and International Medical Corps) through to grassroots activism and community development in several humanitarian and emergency contexts including the Middle East, Eastern Europe, including Ukraine, West and East Africa and South Asia.