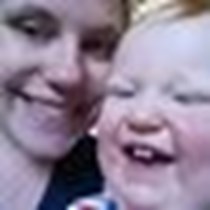 Weʼve raised £55 to Buy epilepsy monitors for an amazing family, so that they can have piece of mind knowing that 2 of their children are sleeping safely

A good friend of mine is a hero of a mum. She and get husband have 5 children, and 2 of their girls have epilepsy.

Taiya is 6 and she has suffered with seizures since she was 8 months old. She spent 70% of her 1st 2 years in hospital and they nearly lost her 4 times. Her seizure types are tonic clonic, these are the type of seizure people imagine when they hear epilepsy. She has a genetic form of epilepsy, it is the scn1a gene. She has multiple seizures mostly at night.

Cadence is 10 and she has suffered with seizures since she was young. Unfortunately hers went unnoticed for years as they are what's known as absence vacancies. She can seizure anytime & it can go unnoticed or written off as daydreaming.

They are under the same consultant and he wants them to both have seizure monitors and anti-suffocation pillows due to the risk of sudep.

From Sabina "This is obviously a major worry for us. So much so that my husband & i dont sleep properly as we are on edge in case one of thd girls have a seizure. We 've mastered the art of coping with little sleep."

Seizure monitors don't come cheap, as I'm sure you can imagine, and not only are they not cheap, we need to raise money for 2!

I have just secured a place for the London Landmarks Half Marathon... Those of you who know me, know that it wasn't that long ago I was saying that I couldn't even run for a bus, so this is a huge challenge! But a challenge well worth it if we can raise enough for these monitors. I am sure that knowing we are raising money for such an amazing cause will help me make it over the finish line!