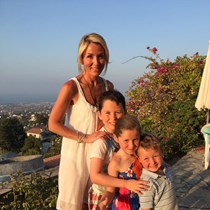 Weʼve raised £1,560 to Help Hector raise money for the Forever Friends Appeal at the RUH in Bath and to contribute towards a once in a lifetime rugby tour

You may well already know that Hector is hoping to go on a rugby tour to Dubai with Millfield Prep School in October and we have agreed with him that he must raise 50% of the funds if he wants to go.

In 2016 Hector was awarded a sports scholarship from Millfield for rugby and, at speech day in June, Hector picked up the U12s Player of the Year award, having scooped the award in his first year for the U11s.

Hector has spent the last 8 months raising over £400 by arduously washing cars, saving pocket money and birthday and Christmas money. Hector needs to raise another £400.

He is now on the final part of his fund raising, which is a 10-hour long, 100-mile sponsored bike ride that he will do on August 11th. He aims to raise £1,000 by doing this and share the money raised with the Forever Friends Appeal at the Royal United Hospital in Bath. They are currently raising funds for a RNHRD and Therapies Centre (http://www.foreverfriendsappeal.co.uk/rnhrd-therapies-centre)

Hector feels strongly about this appeal as the RUH was instrumental in the treatment of Ed Jackson, a former Millfield pupil and a club player for Bath, Wasps, London Welsh and Newport and Gwent Dragons. Tragically, in April 2017, Ed dived into the shallow end of a swimming pool and fractured his spine.

Ed’s recovery has been well documented and can be seen in more detail by following this link: https://www.bbc.co.uk/sport/rugby-union/40420550

Ed is now an Ambassador for the RNHRD and Therapies campaign.

Hector is training hard to get himself into a position to complete the 100-mile ride in one go. He has developed a five week training programme that focuses on riding twice a week and increasing the amount of miles cycled by 15 miles a week. Earlier this week he completed a 25-mile route and aims to finish this week by cycling a 30-mile route. Next week he will be up to a 45-mile route!

If you would like to help Hector to go on his rugby tour and also help the RUH in Bath, then please make a donation – every little helps.