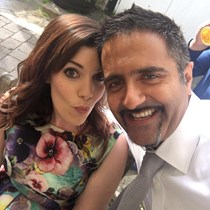 Weʼve raised £10,380 to help give Victoria & Damian Langfield the support they need at this difficult time

As you are probably aware Victoria Langfield is in critical care in a hospital in Antalya Turkey after suffering an aneurysm and brain haemorrhage while on holiday with Damian and their 2 beautiful girls. Victoria collapsed at the airport as they were waiting to check in. She was rushed to the nearest hospital by ambulance and then after scans was transferred to a specialist unit nearby. Luckily a lady from the British Consulate was in the airport where she cared for Madeline and Sofia getting them into the ambulance while Damian dealt with the medical staff. The consulate also sent a staff member to the hospital the following day.

Victoria had a 10 hour operation to stop the bleed on Saturday and then had to have a subsequent 5 hour operation on Sunday to alleviate the swelling in her brain. She is at present in the ICU where it is expected she will be for at least 2 weeks. Victoria's father in law, deputy mum, step mum and friends flew to Turkey. The girls have since returned to the UK with their grandfather, and Victoria's sister Heather and Aunty Helen have flown out to be with Victoria and Damian.

The insurance claim is in progress and Victoria's treatment will be covered, but we have been advised that only accomodation for Damian will be paid for so any food, phone bills, taxis, flights or accomodation for family members will not be covered.

We have had so many people asking what they can do to help that we thought we should set up this page to raise money to ensure that Damian and Victoria's family can be in Turkey supporting them for as long as needed.

***EDIT*** - The response to this has been overwhelming. The family cannot thank everyone enough. The money raised will go a long way to make sure that Victoria has her family around her in Turkey and also to support Victoria and Damian during what is likely to be a long rehabilitation. Damian would also like to use some of the money to make a donation to a relevant brain injury charity.

The following donations have also been recieved by the family